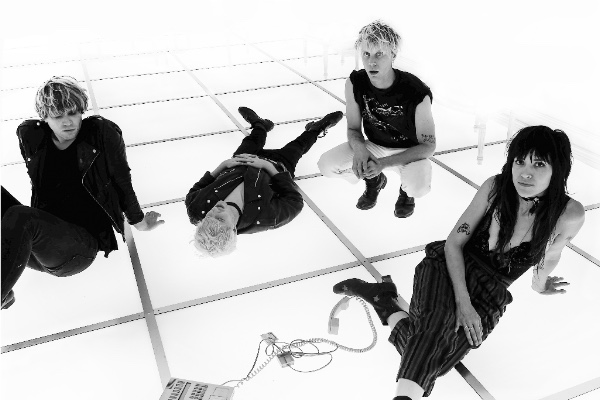 Following the release of their second album ‘Albeit Living’ in July on Felte Recordings, L.A. punk/EBM band SEXTILE have announced plans for an extensive European tour at the start of 2018 and have also shared a new video.

The band’s first ever European tour will kick off with two weeks of dates across the UK, before heading into Europe to play throughout February. Full dates below.

They celebrate the news today with a suitably anarchic video to accompany album track “Ripped”, directed, edited and filmed by Sextile’s own Brady Keehn. He explains the ideas behind the footage saying: “Ripped is a youthful, yet destructive song and I wanted to convey that visually. Innocence and chaos. Kind of what we’re born into.”

The video was shot at The 14th Factory art space in LA, where Brady worked until its recent closing.

The classical astrology meaning of a sextile is that the powers involved cooperate smoothly, so that they encourage and inspire one another, so both sides of the sextile gain by the aspect between them. This mutual stimulation is usually very creative and harmonious.

As a stable fixture in the Los Angeles underground over recent years, Sextile have been gaining a devout following since their inception in 2015. The band boldly throw convention out of the window to create and genre-bending imprint that combines the raw energy of 70’s punk with the intricate and sophisticated structural elements of 80’s post-punk and synth-wave. Their new album, Albeit Living is a politically charged, introspective album of impassioned observations on our world today.