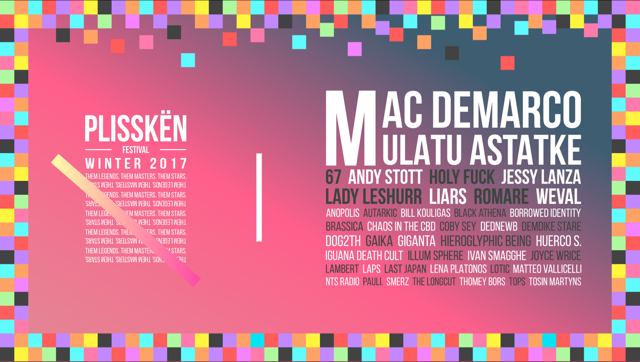 “Plisskën is rammed, fizzing with energy and nobody goes home until dawn” – The Guardian

“In some ways Plisskën is a perfect festival” – Crack Magazine

The winter edition of Athens’ Plisskën Festival returns once again with another innovative, heavy-hitting, multi genre line-up showcasing a broad mix of styles and quality. Set in a city rich in both ancient and modern culture on Friday the 1st and Saturday 2nd of December, Greece’s most ambitious and forward-thinking musical gathering will host 2 consecutive nights with over 40 international & local artists performing across 3 neighbouring venues. The surrounding area with house a food court, cocktail bar and lounge area, creating a unique street festival atmosphere for the crowd to enjoy.

Not only is Plisskën committed to delivering an eclectic line-up containing some of the hottest musical acts on the planet, every year it pushes the boundaries of multiculturalism as well as it’s environmental and social ethos. Believing in young people and wanting to offer something back, The Lab, is an annual workshop organised by Plisskën, where participants get the chance to learn about all of the elements that comprise putting on a festival. From booking the bands, handling the press & marketing, to the environmental awareness of a production and finally the actual set up, by the end of it, one gets a well-rounded view & experience in production.

Plisskën Festival has also been nominated for ‘Best Small & Best Indoor Festival’ by European Festival Awards for their third second consecutive year as well as the 2nd star for the Greener Festival Award.

Doors open on both festival days at 19:00

Plisskën’s box office and collection of festival passes will be located at Metallourgeion.