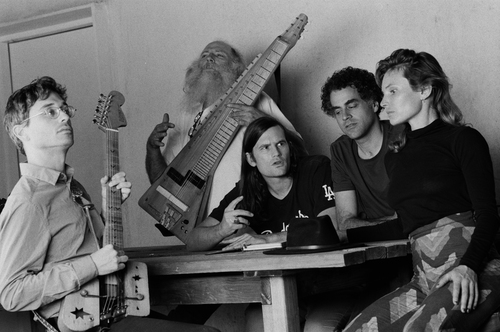 Gun Outfit
Share New Single “Landscape Painter”
Out Of Range out November 10th on Paradise of Bachelors
“Cactus-chewing, smoke-signaled rock music that perpetually rolls towards sundown… a cowboy poetry swirled in honky-tonk postmodernism.” –NPR Music
“[Dylan Sharp] and Carrie Keith fashion a web of briars with their guitars, their low-key psychedelic lines perfectly warped into complementary tangles, tapping a vein of cosmic country gold until the sun finally sets.” – Pitchfork
“Voyaging guitar riffs, cosmic country and the twin vocals of Dylan Sharp and Carrie Keith.” – Uncut
Gun Outfit are sharing the second single, “Landscape Painter,” from their forthcoming album, Out Of Range, coming out 10 November on Paradise of Bachelors.
Accompanying the track is a video directed and edited by guitarist and vocalist Dylan Sharp, an accomplished filmmaker in his own right. In keeping with the “Western expanse” themes evident on Out Of Range—warped tales of Western civilisation melting into those of the American West—and the song’s title and lyrics (which name check Dutch Renaissance artist Brueghel the Elder), the “Landscape Painter” video showcases open spaces juxtaposed with images of the band in urban settings. Shot on Super 8 film during Gun Outfit’s European tour last year, the impressionistic, painterly landscapes featured include Zuid-Kennemerland in the Netherlands, London, and various locations in Cumbria including the Bronze Age stone circle known as Long Meg and Her Daughters.
The video was premiered by The FADER . Sharp explains that “‘Landscape Painter’ is the old story of colour and texture overwhelming human concerns. It’s a song about humility in the face of the natural world and the struggle to draw inspiration from emptiness. It’s just another naive rendering of a gentle breeze.”

Out of Range contains Gun Outfit’s most conceptually sophisticated and lyrically ambitious material, while remaining their most musically subtle, understated, and accessible album to date, completing their gradual metamorphosis from punk aesthetics to a truly cosmic country—wherein “country” is a geography, a structure of feeling, not a genre.
Sonically, Gun Outfit have never sounded more confidently awash in its collective strengths and nuances, its players never more sensually attuned to each other’s playing. Like a stone eroded by years in the arroyo, the band’s enveloping aesthetic of guitar levitations and honky-tonk hexes has become gradually smoother over time.
Out Of Range ranks as Gun Outfit’s most brutally beautiful statement yet.
Watch Gun Outfit’s “Landscape Painter” Video:
https://www.youtube.com/watch?v=nOA2LWBFh8A
Listen To “Strange Insistence”:
https://youtu.be/Zuh8PQR4MuU
Pre-order Out Of Range:
Paradise of Bachelors – http://www.paradiseofbachelors.com/pob-036
Other Retailers – http://smarturl.it/PoB36
Gun Outfit online:
http://www.paradiseofbachelors.com/gun-outfit/