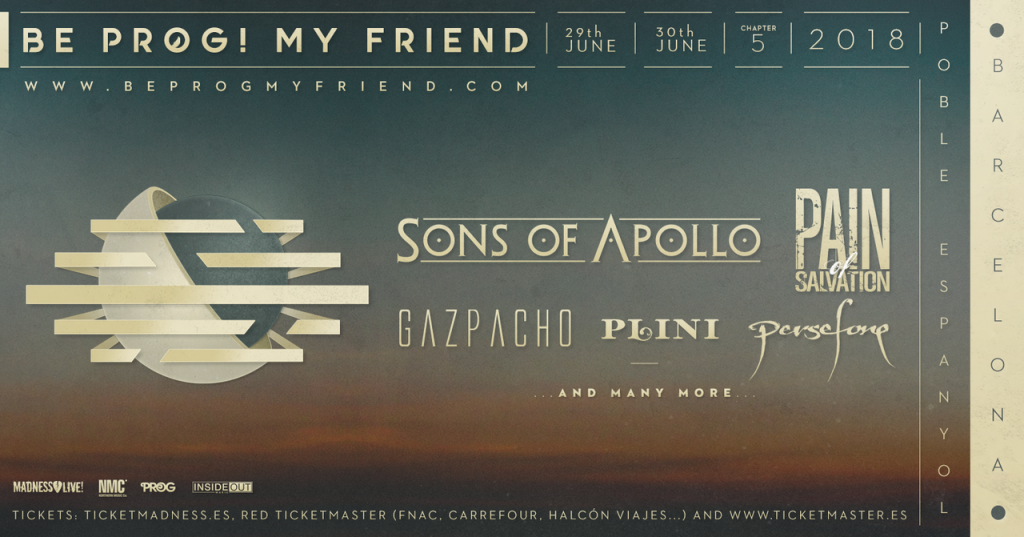 Named as the ‘Event of the Year’ at this year’s Progressive Music Awards, Barcelona based festival Be Prog! My Friend recently announced that Sons of Apollo, Pain of Salvation and Australian virtuoso Plini will play in 2018. Now the festival have added Gazpacho and Persefone to the line-up for next year. They comment:
‘Gazpacho have been one of the most requested bands to play the festival since we first started Be Prog! My Friend. Musically it’s not easy to classify them but some call them ‘art-rock’, others label them as ‘alternative’ and even the phrase ‘neo-progressive’ has been mentioned. Many say they sound similar to Radiohead or The Porcupine Tree. What we do know though is that we are honoured to finally have them at the festival. The tour to support their most recent album ‘Molok’ was a complete success with several sold out shows all over Europe. We are glad fans of Be Prog! My Friend will finally get to enjoy Gazpacho in 2018 and the band have also told us that they will be releasing a new album then too.
We are also pleased to add one of the most promising bands in the progressive scene, Persefone. The Andorra based outfit stylishly and powerfully combine prog and metal. With their fifth album ‘Aathma’ they have really strengthened their position as one of the best new bands around. Welcome!’
Be Prog! My Friend which has played host to the likes of Opeth, Steven Wilson, Anathema, Devin Townsend, TesseracT, The Pineapple Thief, Magma, Agent Fresco, Camel, Meshuggah, Katatonia, Riverside, Ulver, Animals as Leaders, Ihsahn, Alcest, Jethro Tull and Marillion will take place on 29th and 30th June next year.

Tickets are on sale now priced at 130 Euros.
Tickets – http://www.beprogmyfriend.com/