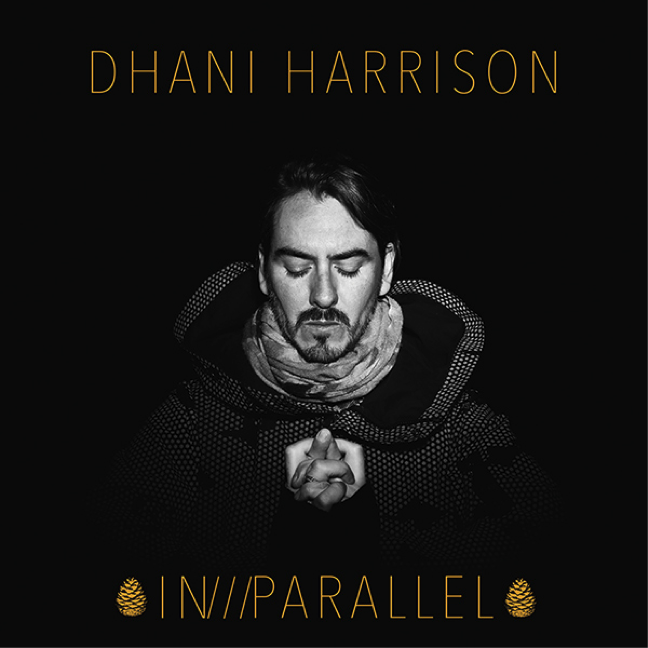 Psychedelic electro-rock odyssey filled with throbbing synthesizers and psychological pondering” – Rolling Stone (on first single “All About Waiting”)
“Dhani Harrison’s solo debut is anything but a throwback.” – Vulture
Dhani Harrison unveiled the music video for his first single ‘All About Waiting’ from the new album IN///PARALLEL released earlier this month. Harrison gave what Rolling Stone deemed a “scorching” performance of the single last week on Jimmy Kimmel Live!
The animated music video depicts a futuristic world, overly developed with machinery and computers, echoing Harrison’s contemplative lyrics “revolution, evolution, patience, revolution, evolution, wasted,” in a setting filled with scenes of both natural and human-influenced disasters impacting the landscape. The protagonist of the video, a DNA scientist, reaches an apparent point of opposition to her colleagues upon the realization that her efforts may be causing more harm than good, and then pursues an ill-fated attempt to bring her discovery to light with her colleagues and team leaders. In the end, she is stripped of her own DNA and tossed away into an endless abyss by a robotic duplicate version of herself. The video was directed and animated by Adam Osgood, with additional illustrations from A. D’Amico and hand-drawn animation by Sarah Schmidt.
WATCH ‘ALL ABOUT WAITING’ VIDEO HERE

IN///PARALLEL offers a soundtrack to self-exploration, and gives listeners a perspective into Harrison’s own personal developments in creating his first solo record. Echoing influences from his time as a composer over the past few years, the music of the new record paints a cinematic soundscape.

Harrison will be touring the U.S. in support of the new album in November with Summer Moon featuring Nikolai Fraiture of The Strokes. Harrison also has a televised appearance on CONAN set for Monday, October 30th.

WATCH THE ALBUM TEASER HERE
The album is available for pre-sale now along with limited edition bundle packages here.
About Dhani Harrison:
Dhani Harrison has more than paid his dues in a career that includes three albums and two EPs with his band project thenewno2, along with a role in the supergroup Fistful of Mercy (with Ben Harper and Joseph Arthur). He co-produced (with Jeff Lynne) his father’s posthumous 2004 album Brainwashed, which earned three Grammy nominations and won the award for Best Pop Instrumental Performance (“Marwa Blues”). He’s also collaborated with an eclectic array of musicians during his career including like-minded artists such as The Wu-Tang Clan, Regina Spektor, Pearl Jam, UNKLE and Prince. In addition, Harrison has become an accomplished soundtrack composer, creating memorable scores for Richard La Gravenese’s Beautiful Creatures and his TV show The Divide (with Tony Goldwyn), as well as the feature Learning to Drive (with Sir Ben Kingsley) and TV series, including executive producer Paul Giamatti’sOutsiders, the Amazon original series Good Girls Revolt and Showtime’s White Famous. Now focusing on his solo project, the new albumIN///PARALLEL will be released on October 6 through BMG Records.
www.dhaniharrison.com