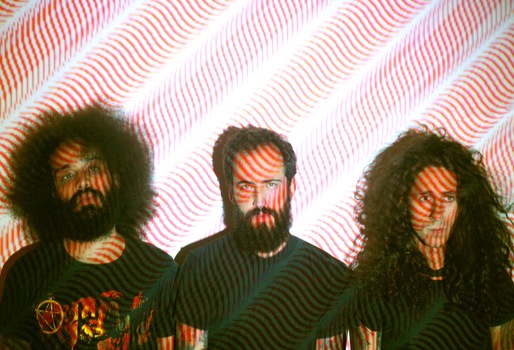 DEAFKIDS SHARE NIGHTMARISH NEW VIDEO FOR “PROPAGAÇÃO”,
TAKEN FROM THEIR NEW ALBUM CONFIGURAÇÃO DO LAMENTO OUT NOW VIA NEUROT RECORDINGS

Reflecting on the idea behind the video, the band remark “this video is a more crude and literal imagery of the interferences of the forces of evil both inward and outward who guides us through our darkest paths throughout our personal and social life. Programmed, perpetuated and propagated by the mechanisms of power and fear and by the negative roots of permanent dystopia that we live in.“
DEAFKIDS’ Configuração Do Lamento is an untamed release, happy to juxtapose monolithic drone riffS with frantic polyrhythmic detours, the band citing the syncopated beats of African drums as a major influence. It is a guttural, scorched mutation of psychedelia, that similar intent of frying the listener’s perception, while void of anything approaching earthy wistfulness, wholly fluid in nature, paying no heed to any musical expectations other than the creators own internal logic. A bombardment of clanging percussion sits below relentless guitar battering, and a whole host of electronic tamperings, effects which in practice manage to further confound the proceedings. Using the term psychedelic in the absolute loosest sense is apt, as the band claims that “non-genre genres” are a chief source of inspiration, referencing anything from their own background in punk, right the way through to spiritual jazz, practically any form which allows the artist to experiment with the utter extremes of musical expression.
While DEAFKIDS’ Configuração Do Lamento was self-released on cassette in Brazil last year, Neurot Recordings have recently officially released the album worldwide on CD and 10” vinyl formats as well as all prime digital platforms. Find physical order options and merch bundles at the Neurot Recordings webshop.
Stream the album via Bandcamp. Fans can also see DEAFKIDS’ video for “Pés Atados”, and view several intense recent live sets from the band, HERE, HERE, and HERE.
DEAFKIDS LIVE:
04/11/2017 Xaninho Festival – Belém, BR
05/11/2017 Estúdio Esconderijo – Fortaleza, BR
10/11/2017 Mirante Bar – Mossoró, BR
11/11/2017 Festival DoSol – Natal, BR
12/11/2017 Festival DoSol – Natal, BR
14/11/2017 Sinewave Side Show – Natal, BR
15/11/2017 TBA – Joao Pessoa, BR
16/11/2017 Texas Bar – Recife, BR
17/11/2017 Cantinho Cultural – Aracaju, BR
18/11/2017 Festival Supernada – Salvador, BR
08/12/2017 Clash Club – São Paulo, BR w/ Neurosis
A key theme at the heart of this singular record is the crisis of identity within a colonized country, the conflict that arises when an imperialist culture is enforced, resulting in a drastic feeling of displacement.  The music alone illuminates this theme, various contrasting influences seeping into the bands sound. As a project, they speak of the ramifications of cultural hegemony specific to Brazil, specifying that, “thanks to the way colonization happened here, a certain part of the Brazilian experience is bounded by a sense of fracture — we’re sons of the border… here and there.“
Though the contextual aspects of the band are fascinating, they also insist that with music, there is a vital importance in surrendering to a degree of “non-rationality, on the sense that it should not be used as a narrative resource for spreading verbal/mental ideas.” It’s this collision of political outrage set against complete bodily and mental release, that makes DEAFKIDS’ Configuração Do Lamento an undoubtedly fearless and inspiring piece of work.
https://deafkidspunx.bandcamp.com
https://www.facebook.com/deafkidspunx