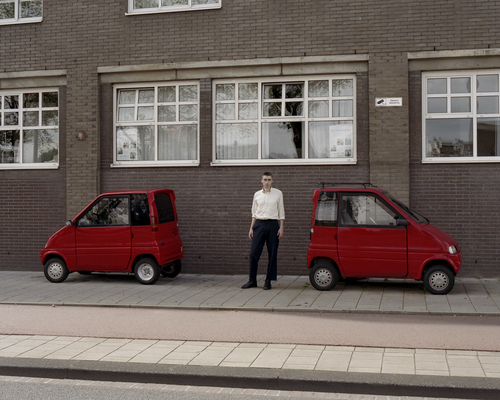 Charles Howl shares the video for ‘The Dinner Party‘ which is the new single to be taken from the brand new album, My Idol Family due 27th October via Oh Many Records. The track blends staccato post-punk with an off-kilter pop sensibility and a wry delivery. The song is about that character that we are all familiar with at every dinner table, party or social situation; the person that has to be the centre of attention. It’s as though every joke they crack is met with glee and they command a room in the same way that they have all their life. You know the one: loud, obnoxious and cocky. The video, which was self-directed by Charles Howl who has directed videos from the likes of CYMBALS, Wesley Gonzales and Let’s Wrestle to name a few, is an unexpected journey starring an unexpected lead.

Of the video he says: “In a song that has an unexpected chorus, I needed an unexpected star. The idea of creating a surreal video with something mundane intrigued me and so I went to Halfords and bought a teenage dream mountain bike, complete with hydraulic suspension. The solo reminds me of the kids show BRUM and at this point in the video, the bike’s personality really flashes into life. I find the whole thing hilarious and satisfying, whether anyone else does is another matter. Either way I have to return the bike this week to try and get a refund.”

Charles Howl has also announced the following live dates in the UK in support of the album:

My Idol Family is Howl’s second album, following on from his 2015 debut Sir Vices. Enthralled by soundtracks and pop music in all its forms, here he updates classic motifs to create a signature aesthetic. Introducing strings and lush orchestration to dazzling effect, he is comfortable with both wide-open song structures and intimate headphone tracks. With this album Howl reveals his true talent as a songwriter and arranger, mixing well-crafted storytelling with a dry wit, it is also more ambitious, touching on themes of idol worship, friends and the family unit.

He returned to Amsterdam to write and record the album, a city he knows well having run away there when he was eighteen and spent some time living there. When he was planning the recording of this new album, he made a conscious decision to get away from London with all the distractions and opinions, plus, studio time is expensive. He found a reggae studio in the outskirts of Amsterdam called Weesp, which included an Air B&B room, so he sublet his room in London and spent a month in the studio.

Accompanying Howl in Amsterdam was fellow Proper Ornaments member and drummer, Bobby Syme, who is a gifted producer and engineer, and took the reins in the studio. Most of the album was recorded between the two of them, with additional string arrangements by Richard Jones and with Victoria Hamblett on backing vocals.
With My Idol Family, Howl has found his voice both with his more confident singing style but also in his lyrics, which are more prominent in the mix. The album title emerged from the overarching themes of family and idols, and how people idolise celebrities and try to emulate their lifestyle.

At times rapturously melodic and others jarringly off-kilter, there’s a real variety of sounds on My Idol Family. Howl didn’t want to be afraid to get cheesy with this record and as a result, it feels more honest. Without the pressure of having to be faithful to one particular genre or trying to fit in to the favoured psych revival of recent years, he draws on eclectic influences to embrace a wider scope, thus creating something that sounds refreshingly unique and remarkably modern.