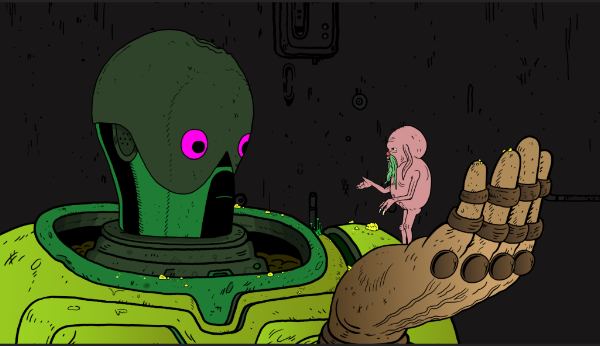 “TARBOZ (translated log of inhabitants)“ is the long-awaited, animated short film from creative polymath Chad VanGaalen and is now streaming online, ahead of his European live dates in a couple of weeks.

VanGaalen delivered this statement on the making of the 25 minute-long film:  “TARBOZ was planned as the first episode of “Translated Log of Inhabitants,” and was an experiment to see if I could make a long-form improvised animation and still get out alive. I barely did!

The “Translated Log of Inhabitants” was conceived as a guide to the origin story of many different species. I imagined myself doing dozens of these episodes, focusing on a new life form very time — very much like a page from “Barlowe’s Guide to Extraterrestrials.” It expands a universe that I had already been developing in my own music videos, as well as ones for other bands. The videos for “Peace on the Rise” as well as ones for Black Mountain and Shabazz Palaces all exist in the same world (at least in my head).

TARBOZ is stream of consciousness, dreams, and friends. Alternate versions of my own reality. Coming to terms with the fact that I will never play freestyle disc professionally, but wanting to pay homage to the peaceful energy of that sport. It also reflects my needing to score a sci-fi film so badly that I ended up making my own.

I TARBOZed myself for two years, through software transitions and computer wastelands, and slowly the physical realm slipped away. I learned a lot about why you should get into something with a clear idea in mind. I would never make another animation in quite the same the way I made this again. After two years of working on it in solitude, I just wanted my life back. Doing it alone was my biggest mistake. I was very lonely.

It didn’t really end up like any of these things, but I hope this might help people understand the spirit of the piece. Although I’m not sure I understand it entirely myself. Sometimes you need to just do it in order to know how not to do it?”

The album emerged from the experimental instruments that fill his Calgary garage studio. Among them is a beloved Korg 770 monosynth, which VanGaalen coveted for years before fixing one up and devoting a lot of recent energy to recording “duets” with it. One of these, “Prep Piano and 770,” is the lone instrumental on Light Information, more atmosphere and chord bursts than the rest of the album’s hooky rock narrative.

Light Information can be purchased from Sub Pop and Flemish Eye. LP purchases of the album from megamart.subpop.com, select independent retailers and at Chad’s shows, will receive the limited Loser Edition on crystal clear vinyl (while supplies last). There is also a new T-shirt design available.

Quotes on “Light Information”:
“A complex interplay of light and dark sits at the thematic heart of this record, with VanGaalen stepping away from his preoccupation with alienation and embracing the emotions that span the spectrum” – 7/10 Loud And Quiet
“Anxious, lightly wound songs packed with breathless synths and guitar drama, yet still sounding deceptively simple.” – 4/5 MOJO
“What makes these songs truly surreal (and ergo, sublime) are his wacky scenes, both monstrous and endearingly human all at once.” – 8/10, Drowned in Sound
“VanGaalen’s clear talent as a producer and arranger still shines through” – 7/10, Uncut
“One of his best albums yet.” – Noisey
“His confident songwriting and beaming vocals bring the record’s crowning fun and charisma into full focus.” [Light Information, 8/10] – FutureMusic
“VanGaalen’s sixth album shows him easing more into his bright and disorienting vision.” –8/10, The Line Of Best Fit