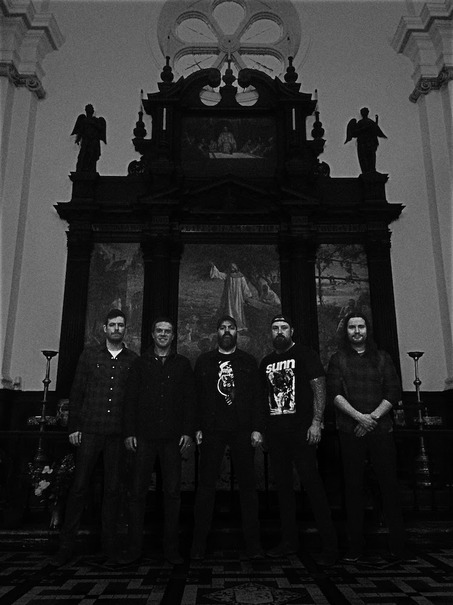 ALL PIGS MUST DIE SHARE THE TITLE TRACK FROM HOSTAGE ANIMAL,
DUE OUT OCTOBER 27TH ON SOUTHERN LORD
All Pigs Must Die share the title track from their upcoming album Hostage Animal (Southern Lord) as the release date nears on the 27th October. Hostage Animal is a 10-song album that distills aggressive music to its purest tenets.  The band, now a 5-piece with the addition of Brian Izzi (Trap Them) on guitar, is comprised of some of the most well-seasoned musicians on the eastern seaboard —Kevin Baker (The Hope Conspiracy), Ben Koller (Converge), Matt Woods, and Adam Wentworth (both of Bloodhorse).  Hostage Animal is their most dynamic collection of work thus far; concise, intense, aggressive and carrying a bleak world view.
LISTEN TO THE TITLE TRACK “HOSTAGE ANIMAL”
HEAR PREVIOUS TRACKS “A CAUSTIC VISION” AND “BLOOD WET TEETH” VIA BANDCAMP
APMD unleashed their first full length in 2011 with God Is War, and the 30-minute rip was a nod to primeval disdain and anger. Exploring facets of human conflict one track at a time, God Is War introduced the world to a whole new spectrum of rage. In 2013, APMD upped the ante with Nothing Violates This Nature. Honing their craft with more speed and filth, APMD pushed their sound closer to the edge of the cliff.  Now, in 2017, the band is gearing up for the release of Hostage Animal which, like its predecessors, was recorded at Kurt Ballou’s GodCity Studio. But that is where the similarities end; Hostage Animal ushers in 10 new songs that pulverise, gnash, and whirl with the band’s most punishing delivery yet.
Hostage Animal showcases that All Pigs Must Die are far more than the sum of their parts, and their fusion of crust punk, hardcore and metal is more ferocious than ever before.
Live dates:
October 19  Brooklyn, NY @ Saint Vitus
October 20  Boston, MA @ Great Scott
October 21  Providence, RI @ AS220
ALL PIGS MUST DIE IS:
Kevin Baker (vocals)
Brian Izzi (guitar)
Ben Koller (drums)
Adam Wentworth (guitar)
Matt Woods (bass)
Hostage Animal, Track Listing:
1.  Hostage Animal
2.  A Caustic Vision
3.  Meditation of Violence
4.  Slave Morality
5.  End Without End
6.  Blood Wet Teeth
7.  Moral Purge
8.  Cruelty Incarnate
9.  The Whip
10.  Heathen Reign
Pre-orders now live via the Southern Lord Europe store.