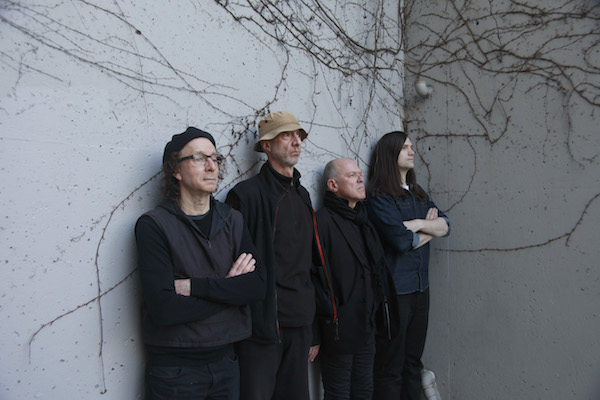 This Autumn, musical pioneers Wire continue celebrations of their 40th year as a band with an extensive UK tour.

From Dundee to Dover, the prolific four-piece will be introducing fans to tracks from their highly critically acclaimed new album. Silver/Lead is their 15th studio album and arrived on the anniversary of the band’s first proper show at London’s The Roxy on April 1st 1977.

Wire are one of the world’s most ground-breaking bands, their influence acknowledged by bands as diverse as Blur, Sonic Youth, R.E.M. and Savages. But they have never been interested in exploiting past glories. For Wire, there is only ever one possible direction: forwards. So it’s perhaps not surprising that over recent years, they’ve played strings of sold-out shows, achieved career-best record sales, and been cited as a strong influence by yet another generation of bands. ‘Silver/Lead’ is the sound of a uniquely addictive 21st century psychedelic post-punk.

Praise for ‘Silver/Lead’:
“Wire’s remarkable resurgence continues.” – The Sunday Times Culture
“Even now, few do it better than Wire.” – **** Q
“The sound, if grounded in the past, is focused on the present. Wire still make distinctly modern, distinctly European music.” – The Wire
“Wire continue to thrive on their own terms.” – 4/5, The Guardian
“Forty years after their debut masterpiece, Pink Flag, the post-punk pioneers Wire continue to combine unusual lyrical themes with a few simple musical ideas to great effect” – The Times
“Hinting at sense as they spread confusion.” – 8/10, Uncut
“Newman’s melodic impulse has never been sharper, drone pop never more relevant and uplifting.” – 8/10, Classic Rock
“Achingly, addictively satisfying at its high points, it could easily be an entry point for unfamiliar ears eager for sonic intricacy and oblique lyrical heft.” – Electronic Sound
“Treasure Wire during this milestone year, because as Silver/Lead ably demonstrates, they’re vital members of the important minority pushing the envelope with every single new release.” – PROG
“The ever- evolving quartet gleefully formulate some of the most invigorating guitar pop of their lengthy career.” – **** Record Collector
“Not a rare gem late in the band’s catalogue but yet another example of their consistent evolution.” –– 8/10, Loud & Quiet
“Carries on it’s immediate predecessors’ good work.” **** MOJO
“Captures the band in as strong form as ever.” – The Quietus
“Catchy feedback drenched punk. ” – FACT
“At this point in their uniquely demarcated, legacy-remodeling run, they seem practically incapable of making a misstep.” – 8/10, The Line of Best Fit
“Wire make the complex look simple, they make the obtuse into pop culture, they freeze frame guitars into perfection – 9/10, Louder Than War
“Wire have created an album of musical contrasts and striking soundscapes… The direction that they’re moving in continues to be exciting.” – 4/5, The Arts Desk
“Wire are still willing to evolve their sound and question perceptions of the music they make. ‘Silver/Lead’ is an accomplished record from a band who continue to challenge their audience.” – 4/5, DIY