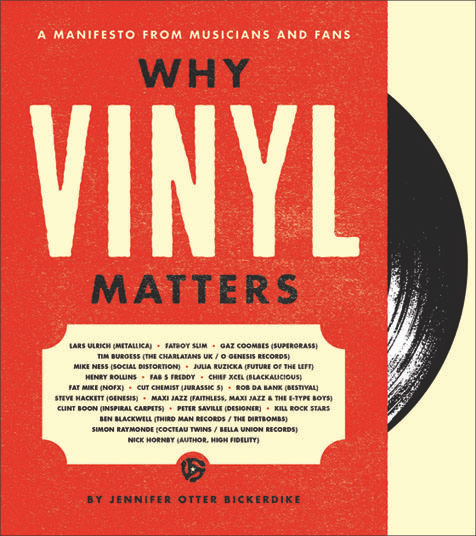 Number of records bought by author in name of ‘research’: 108

Artists have long heralded the vinyl format as the superior way to experience music.  Many bands insisted that their music get vinyl release, even at the height of CD popularity.  For many, vinyl is not just a means to listening to music, but a way of defining self, community and culture.

In 2016, vinyl sales overtook digital sales for the first time in the UK.  Step into major supermarkets and you will now see vinyl on sale. Record stores, selling only vinyl records, are opening on our high streets.  Vinyl, once thought to be a dying market, is now facing a major revival.

In Why Vinyl Matters, pop culture writer and historian Jennifer Otter Bickerdike explores, and celebrates, the vinyl revival.  She interviews some of our most iconic artists, including hip-hop stars, indie legends, DJs, producers, album cover designers, photographers, label founders and record store owners.  Each superstar and superfan talks about their own experience of vinyl and what it means to them, and the importance of its re-emergence- seemingly against all odds- as a physical format in the era of the digital economy.

Why Vinyl Matters is part history, part future forecasting, part nostalgia and all celebration.  A collection of more than 25 interviews, all illustrated with photos, sidebars, quotes, album covers, outtakes and much more.

The perfect gift for any audiophile- Why Vinyl Matters is a must read in 2017!

‘It’s the ritual element of it.  Its running your finger down the side to try to open the plastic wrap, and usually cutting that part under your nail.  Then pulling it out, and seeing if there’s an inner sleeve, and hoping for a gatefold.’ – Lars Ulrich, Metallica

‘Vinyl is the means by which music was meant to be listened to: on big speakers, speakers which vibrate through the ceiling, he floors, the walls and the body.’ – Mike Ness, Social Distortion

Jennifer Otter Bickerdike is a familiar name in the world of pop culture.  An academic, writer and historian, Jennifer remains enthralled by vinyl, and has embarked on a journey to share her passion- and the passion of like-minded stars- with the world.  Jennifer is the Course Leader of Music Journalism at BIMM London and has authored several books on the topics of music, fandom and celebrity cultism, such as Fandom, Image and Authenticity:  Joy Devotion and the Second Lives of Kurt Cobain and Ian Curtis (2014), The Secular Religion of Fandom (2015) and Joy Devotion: The Importance of Ian Curtis and Fan Culture (2016).