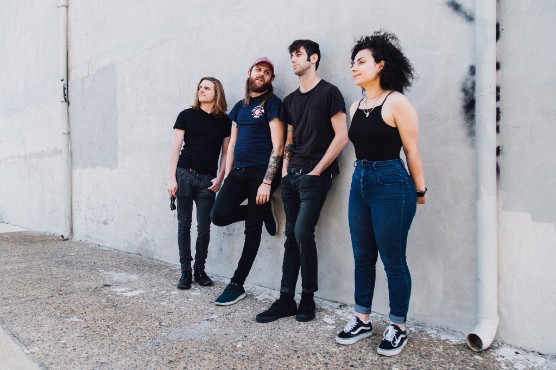 On Tour Now With Remo Drive and McCafferty

Philadelphia indie pop band Small Circle are now streaming their debut album Cyclical via Upset Magazine. Small Circle features Cameron Boucher, Adam and Charlie Singer of Sorority Noise, as well as first time frontwoman Marissa D’Elia. Cyclical is set to be released on September 8th via Flower Girl Records. Pre-orders for the album are available now physically and digitally via Flower Girl Records. Upset spoke to D’Elia about the inception of the band, her writing process and how she suddenly found herself making music. Small Circle is on tour this week with Remo Drive and McCafferty on the east coast. A full list of dates can be found below.
Stream Small Circle’s debut album Cyclical in full now via Upset.

Biography:
Both as artists and people, Small Circle is a band built on self-discovery. When Sorority Noise singer/guitarist Cam Boucher recruited Marissa D’Elia for a new project in early 2016, he’d never even heard her sing. But he knew she had important things to say.Soon the pair—along with fellow Sorority Noise members Adam Ackerman (guitar) and Charlie Singer (drums)—had formed Small Circle, who were quickly dubbed a “supergroup” by AV Club and released their debut EP, Melatonin, in April 2016 on Boucher’s Flower Girl Records. Her bandmates were veterans of the game, but for D’Elia, who counts Small Circle as her first band ever, stepping into the role of songwriter and frontwoman was the ultimate learning experience.