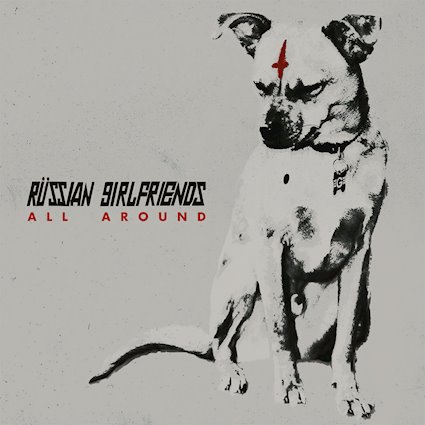 If you are a fan of rousing and melodic punk with a catchy edge to it, then Russian Girlfriends could well be your new favourite band and one one listen to the bands debut album All Around will make that certain. This a European re-release of the album and what better way to get acquainted with Russian Girlfriends than with this blast of punky goodness.

The Albuquerque quintet have a knack for memorable, hard edged but accessible  and above all uplifting songs and they don’t wait around to show this as the bands music explodes as soon as it blasts out your speakers. All Around’s opening track Theme From Stripes starts with a frenetic bassline before the roar of the bands groove kicks into play and the powerful vocals of Adam Hooks take hold. The song has a stop-start quality to it but when it starts again, it really starts!

The brilliantly titled A Rollerskating Jam Named Regret follows and continues right where the opening track left off with a driving sound that made me think straightaway of Samiam and you can’t go wrong with that. It’s got that same defiant melody and storytelling quality that the Berkeley punk legends also have although Russian Girlfriends have their own vibe going on for sure and when the song ends, it is evident that the song itself is definitely as memorable as its title.

Bones Of A Saint really shows off the bands melodic qualities (as well as cementing their storytelling credentials) and the lyrics on this one are heartfelt as well as cutting and that uplifting vibe is there in spades.
Anxiety Attack and A New Sense Of Self crank up the energy and the heaviness with an abrasiveness that welds well with the catchiness while The Biggest Lie is an initial cacophony of huge, sludgey riffs that explodes into a melodic hardcore jam.

Comanche Moon continues that hardcore feel with its furious pace, amping the energy up even more and that energy is carried on with the arrival of Hey Jealousy… Again, a raucous punk song with those crucial elements of rock n roll all over its vibe and the rawer grooves of I Prefer Pitbulls To People.

All Around concludes with the vibrant Tad Kubler, a song with an initially sunny disposition but with an underlying bite beneath the surface that results in the song having a bittersweet feel to it but carrying on the catchiness and Terrible Twos finishes the album off nicely with its blend of abrasive melodies.

All Around is a fantastic introduction to the music of Russian Girlfriends and hopefully the bands new album will come soon so that we can bask in the bands melodic punk greatness once again.