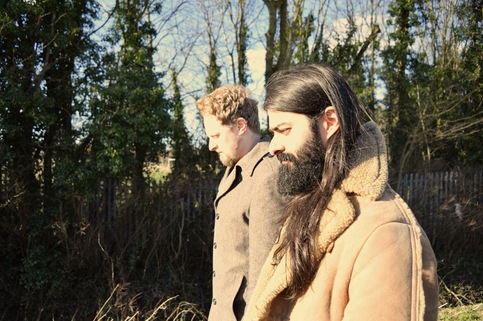 Necro Deathmort share new music from their eighth full-length album Overland (Profound Lore, 6th October). Progressing from last year’s The Capsule, Overland presents itself as a different observation, more dynamic and layered than its predecessor. Overland expands their sonic pallette introducing further acoustic instrumentation and exploring new territory. This progression can be heard on multidimensional album opener “Poliz” which sets the tone for the rest of the album, as Necro Deathmort slowly build layers of sounds, working into a repetition around a key phrase, and pulsing beat, before dropping away into blissful ambience..

TRACK LIST:
1. Poliz
2. Cat Hedral
3. 80,000
4. Vortex
5. Gu
6. Obey
7. Meddle
As well as crafting their own music, the duo have also produced remixes for Steven Wilson (Porcupine Tree), Ulver, Obsidian Kingdom, Vaee Solis, and also recently appeared on the new Steven Wilson solo album To The Bone, producing two tracks.
Forever at ease in the live realm, Necro Deathmort are just as comfortable performing for electronic music audiences as much as noise, and doom metal fans, having shared the stage with The Haxan Cloak, YOB, Oranssi Pazuzu, Dälek, Ulver and Atari Teenage Riot to name just a few. They shall be performing in London on 23rd September at Kameo, alongside Bong, 11PARANOIAS, and Ghold.
NECRO DEATHMORT FACEBOOK