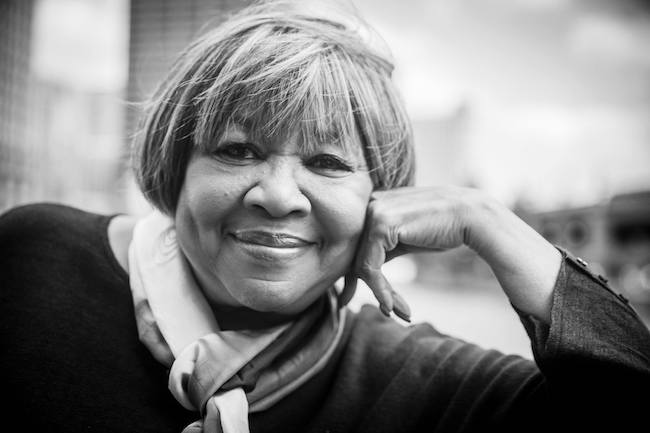 MAVIS STAPLES
SET TO RELEASE POIGNANT NEW ALBUM WHICH SPEAKS TO OUR DIVIDED TIMES
‘IF ALL I WAS WAS BLACK’
PRODUCED BY JEFF TWEEDY
RELEASED ON 17 NOVEMBER ON ANTI-
“It’s the compassion that I feel.  I want you to feel that same compassion…You can’t stop me. You can’t break me. I’m too loving. These songs are going to change the world.” – Mavis Staples
Mavis Staples has again joined forces with songwriter-producer Jeff Tweedy for a new album entitled ‘If All I Was Was Black‘, out 17th November.
You can preview the album’s powerful title track now.
The history Mavis recalls from her early years touring with her family as The Staple Singers, the prejudice, ugliness and danger, well it’s all still here. In response, the singer has delivered I’f All I Was Was Black‘, ten songs about contemporary America today, a present day filled with ghosts of the past. “Nothing has changed,” Mavis remarked in early August, just days before neo-Nazis marched with swastika flags in Charlottesville, Virginia, as a young woman was murdered. “We are still in it.”
‘If All I Was Was Black‘ is Mavis’ third collaboration with songwriter and producer (and Wilco frontman) Jeff Tweedy. Their first partnership in 2010, ‘You Are Not Alone’, won a Grammy Award for Best Americana album. Their second effort together, ‘One True Vine‘, was a Grammy nominee. But ‘If All I Was Was Black‘ marks the first time Tweedy has composed an entire album of original songs for Mavis’ legendary voice and a nation she’s uniquely poised to address.

In the wake of the current race-baiting and rhetoric of exclusion appearing not just on the streets, but issuing from statehouses and even the White House, Mavis and Tweedy found themselves completely in sync and wanting to say something about the fissures dividing the country. “We’re not loving one another the way we should,” Mavis confided, as if sharing the secret to happiness, or something better. “Some people are saying they want to make the world great again, but we never lost our greatness. We just strayed into division.”

Explaining why he decided to tackle the state of the union, Tweedy said, “I’ve always thought of art as a political statement in and of itself—that it was enough to be on the side of creation and not destruction. But there is something that feels complicit at this moment in time about not facing what is happening in this country head on.”

The lyrics are occasionally shot through with anger.  “I have a mind to bury them whole, when they go low,” Mavis sings on ‘We Go High’. “There’s evil in the world, and there’s evil in me” opens the first verse of ‘Try Harder’. “Oh, they lie, and they show no shame” adds a harsh undercurrent to ‘Who Told You That’, an anthem against accepting the status quo. Unsettling musical elements wind their way through the record, too, from the abrasive guitar distortion of ‘Try Harder’ to a descending bass line that signals danger on ‘Little Bit’.

Despite all this, the mood ring on Mavis’ 2017 outing is set to love, which runs through and over the fury and despair. The songs move less like a hammer and more like the tide, with Mavis countering the anger with an eye toward the work that is required to bring change. She is singing the world as it is, but also a way forward. Mavis is sure that the answer is to lift each other up. She’s not embracing the anxious hesitation of respectability politics but the possibilities of love.

If All I Was Was Black Track Listing
For more information:
www.mavisstaples.com/