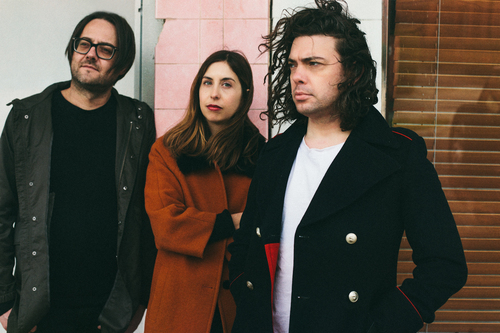 Tuesday 5th September 2017 – The Islington, London
Wednesday 6th September 2017 – Brudenell Social Club, Leeds **
Friday 8 September 2017 – Astra Stube, Hamburg
Saturday 9th September 2017 – Paradiso Noord, Amsterdam **
Sunday 10th September 2017 – The Castle Hotel, Manchester
Monday 11th September 2017 – The Greystones, Sheffield
Tuesday 12th September 2017 – Broadcast, Glasgow
Thursday 14th September 2017 – Rough Trade East In-Store Performance, London
** Supporting Rolling Blackouts Coastal Fever
Australian band Lowtide share the stunningly shot video for their new single “Alibi“, which is out now via Opposite Number. The video was premiered by Clash, who wrote: “Beautifully brooding songwriting, the crisp visuals perfectly compliment Lowtide’s beautiful music.”
Blending upbeat dream pop with melancholy shoegaze, the band create a complex, layered sound. Wrapped in a warm glow of chiming guitars and compelling melodies, their new single ”Alibi” soars with mesmerising dual vocals weaving astute harmonies. The song is about the slow realisation that the mundane has well and truly overshadowed the magical in a relationship.
Lowtide head out for their first UK tour, which includes a performance at the End of the Road festival and headline dates in Brighton, London, Manchester, Sheffield and Glasgow as well as a support slot for Rolling Blackouts Coastal Fever in Leeds.
Having initially released their well-received self-titled debut album in 2014 via Lost & Lonesome, Lowtide then released that album internationally in 2016 via Opposite Number. They received support in the UK from Steve Lamacq on BBC 6 Music, Rough Trade Magazine and Album Club inclusion.
Originally known as Three Month Sunset, Lowtide came together in Melbourne in 2009. Following the release of their debut EP (2010) and the “Underneath Tonight” 7” (2011), Lowtide continued to refine their live show playing locally and all around Australia, as well as travelling to New Zealand. They played some of the biggest festivals in the region including Boogie! Festival and Applecore Festival in Victoria, before headlining Fasterlouder’s Melbourne Music Week show in 2014.
Lowtide’s debut album truly defined their sound and was met with critical acclaim, including a 4 Star review in Rolling Stone who wrote; “The album houses a perfect mix of the driving and drifting, with songs changing shape right before our ears”, and Clash wrote that it was “a highly creative piece of dreamy shoegaze that fused a fondness for beautiful texture with sharply defined songwriting.”Lowtide was also nominated for The Amp (Australian Music Prize) in 2014.
The release of the ‘Julia/Spring’ 7 inch single in 2015 continued to increase Lowtide’s profile both locally and internationally, with an East Coast tour and airplay support at Triple J and across national community radio. Both tracks have now received a combined number of 160,00 streams on Spotify alone.
The band are now eager to tour outside of Australia and will be bringing their engaging live shows to the UK/EU in September 2017.
https://lowtidemelbourne.bandcamp.com/
https://www.facebook.com/LowtideMelb/
https://www.facebook.com/oppositenumberrecords/