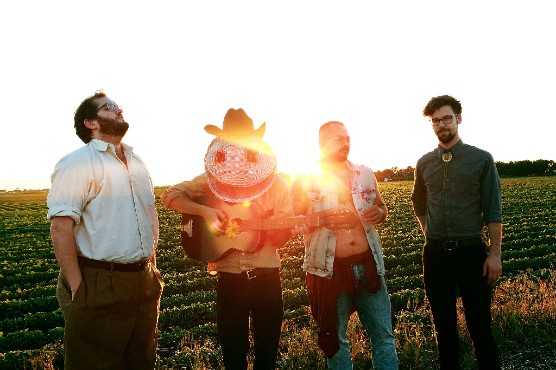 Longface Premiere Music Video For “Howdy” via The 405

Chicago alt-Americana artists Longface have just released their new music video for “Howdy” via The 405. The video was animated by experimental rapper and label mate Nnamdi Ogbonnaya. “Howdy” is the new single off of Longface’s new album Hillbilly Wit, set to be released October 27th on Sooper Records. The 405 calls the video “compelling and sufficiently crazy,” calling “Howdy” “a raucous track that rips and roars with emotional fury. If this doesn’t get you hyped up for Hillbilly Wit, I don’t know what will.” Pre-orders for Hillbilly Wit are available now via Sooper Records. Longface have also just announced a tour this fall, including a run with Bad History Month. A full list of live dates can be found below.

Watch Longface’s video for “Howdy” now via The 405.
With their new record Hillbilly Wit, Longface have created a character driven piece of satire, executed through their blend of country-inspired folk leanings and grimy experimental rock. The band is looking to create a world where beer-drinking bumpkins, urban hipsters, and starving artists melt unevenly into a monstrous sideshow of rock n’ roll Americana. In heavier moments, Longface confronts social isolation, substance abuse, and economic stagnation. In lighter moments, he radiates a folksy playfulness and embraces the role of whimsical storyteller.

Biography:
Noteworthy for creating an unhinged musical satire around its namesake character, Chicago’s Longface employs clever guitars and elegant vocals to form a unique blend of twang, discord, and pop. An absurd universe of characters draws heavily on the curious imaginings of Kentucky-born artist and songwriter, Anthony Focareto (vocals, guitar). Focareto is a veteran of Chicago DIY, having led acts including New Diet and Regular Fucked Up People. He has stomped around the city’s haunts for more than a decade, living the nomadic plebian lifestyle parodied in his newest creation. After years of more straightforward rock projects, Longface is a decidedly more experimental pursuit that freely associates Focareto’s country-inspired folk leanings with his penchant for grimy urban noise. He is supported by a group of inspired musicians including Glenn Curran on guitar (Man Without a Head, co-founder of Sooper Records), Dillon Kelley on bass (Coaster, New Diet), and Kain Marzalado on drums (House of Normandie).

Focareto broadcasts the ills of modern society through the Longface character in an attempt to divine his freedom from them. The end result is equal parts confession and satire; a world where beer-drinking bumpkins, urban hipsters, and starving artists melt unevenly into a monstrous sideshow of rock n’ roll Americana. In heavier moments, Longface confronts social isolation, substance abuse, and economic stagnation. In lighter moments, he radiates a folksy playfulness and embraces the role of whimsical storyteller. He is haunted by demons, yearning for a return to grace, and trying to catch a break.

The debut EP (The Life & Death Of Longface, 2015) told the story of Longface’s adult years, and his sojourns between country and city. On its follow-up full length, Hillbilly Wit (Sooper Records, 2017), the band trades narrative for theme. They concentrate on embodying the sound of Longface more than they do articulating any specific tale. Hillbilly Wit is a musical tapestry where infectious vocals, noise rock, and dark comedy materialize into an album made for the jukebox of a cosmic roadhouse. It is, however, not completely devoid of an organizing principle. The final track, “Hornswoggled,” contains a reveal: the album is a compilation of lost songs recorded by a now-missing Longface, found by his Pa-Paw and Uncle Jackie.  The individual tracks are therefore experienced as a series of musical vignettes shedding light onto the contours of a greater Longface saga. Titles like “Candy Store Robbers,” “Deep Fried American Dreams,” and “Howdy” are emblematic of the album’s thematic nature.

A medley of visual content accompanies the roll out of Hillbilly Wit. The band undertook a lengthy collaboration with artists, photographers, and filmmakers to illustrate its vision for the first time. Artist Jennifer Cronin painted iconic album covers. Photographer Natalie Escobedo captured otherworldly images. Visual artists Ryan Gregory, Nnamdi Ogbonnaya, and Mark Skala each made music videos to capture the universe on screen.

Longface is taking its sideshow on the road in support of Hillbilly Wit this coming November, including a string of east-coast dates with Boston’s Bad History Month (Exploding in Sound).