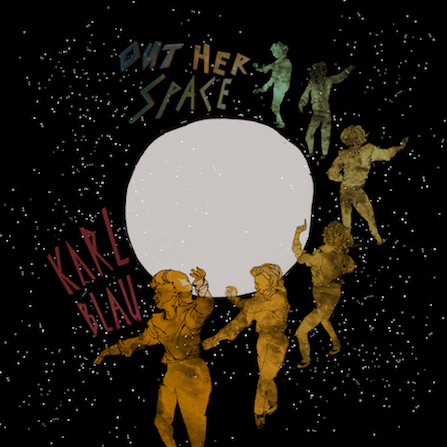 Arriving in the UK next week to perform at Matthew E White’s Spacebomb night at the Barbican, Karl Blau has just shared “Poor The War Away”, another highlight from his upcoming album “Out Her Space”, released 17th November on Bella Union. Of the track Blau says: “This song is about pointing out Captain Obvious. War is a game for the wealthy and the uneducated, yet it involves the entire world. So many things to pay attention to right now, and we are far from starving this beast of fabricated hate, and though I may preach to the choir mostly here – let’s keep a positive mantra on our minds that we can create the means to change. We can change our minds and reframe our reality. And, yes, you can dance The Macarena to “Poor the War Away.” Listen now via the link below…
Karl Blau – “Poor The War Away”
Sequestered away in rural bliss, 90 minutes north of Seattle on the Washington state coast, Karl Blau has been making records for 20 years, but never with European distribution. So, when Bella Union released Introducing Karl Blau in 2016, it shone a belated and deserved light on “one of the great hidden treasures of music,” claimed album producer Tucker Martine. But given Introducing’s specific agenda – a set of gorgeous, lush cover versions drawing mostly on vintage Nashville’s country-soul with Blau concentrating on his rich, reverberating voice, his latest album Out Her Space is so different that it could be titled Reintroducing Karl Blau.

Out Her Space, released 17th November on Bella Union, features all Blau’s own material, production and multi-instrumental skills, and forges a gorgeous, languid and hook-infested gumbo of soul, funk, some jazzy blowing and Afro-pop, to arrive somewhere else entirely. Blau previously shared the first track from the LP, entitled “Slow Children”, which you can listen to HERE, while the album is available to preorder HERE.

Out Her Space also testifies to Blau’s studio skills, as he captures the glimmering, humid depths of those sweltering southern influences, despite his north-western heritage. But then Blau has engineered and produced a heap of records for himself and others, often at his home in Anacortes, releasing records onWashington’s favourite indies K and Knw-Yr-Own, as well as through his own Kelp Lunacy Advanced Plagiarism Society subscription service. But Out Her Space comes from another place, with another story to tell.

In 2009, Blau had been asked to record Richmond, Virginia country-psych band Great White Jenkins, fronted by Matthew E. White. In 2012, when White started a new label, Spacebomb, based around a house band in the style of the old Stax and Motown ventures, he called on Blau again. The album that came from this partnership was White’s solo album Big Inner (snatched up by Domino Records), which The Guardian called, “a genuine revelation.”

Having heard Blau’s own demos, White ensured that Spacebomb’s hot-to-trot backing band – centred around bassist Cameron Ralston and drummer Pinson Chanselle – supported Blau too, and he came away with an album’s worth of tracks, which also featured Blau (guitar, percussion, synth, sax), White (guitar, synth), Phil Cook of MegaFaun (piano) and a wider cast of horns, piano, viola and backing vocals. It’s partly where Out Her Space got its name: “It’s a cousin to Big Inner,” says Blau.

The album plays with humanitarian themes, against a backdrop of self-immolating American politics. For starters, the title Out Her Space was equally inspired by Blau’s, “overwhelming feeling to point out that men, in general, need to listen, to stop being so assertive and to get out of her space, let her balance again. Chill out dudes, rather than lead us over the cliff.”

The opening ‘Poor The War Away’ was written during the George W Bush era, “and it’s more relevant than ever. We’re steamrolling down the mountain side.” ‘Slow Children’ is a request for mankind to slow down, with a “rigid truth chorus” and “free association” verses, says Blau.

The speedier ‘Where You Goin’ Papa’ also works better in 2017 than 2012, since Blau’s youngest daughter is no longer a baby, and he can think about touring again – it’s another reason, he says, why it was worth delaying this album. ‘I Got The Sounds Like You Got The Blues’ addresses the same scenario – “as the family breadwinner, I’m telling my kids, don’t worry, I’ll be back” – while both tracks feature some mighty jazzy extemporising. “Some songs have long tails,” he says. “I thought maybe we should cut them off, but they grew on me.”

Another key track is the album’s country-rocking ‘Blue As My Name’: blau in German means ‘blue’, as well as ‘drunk’, “which is describing me, as I’m ‘drunk with wonder again’ in the song. I constantly find life is amazing, but alongside that, is the feeling that things are out of control.”

The world is out of control, but Blau’s life is anything but. Introducing Karl Blau did its job, as a great record and an introduction to a wider audience. Given Matthew E. White was voted a ‘breakout artist’ of 2012/13, then Blau, on this evidence, is unquestionably a ‘breakout artist’ of 2017/18. If Out Her Space has finally found the right time to emerge, so too has its creator.

Karl Blau has announced a number of European shows to follow release including the below four UK shows. He will also take part in what is sure to be a very special evening at the Barbican for the Spacebomb Revue, an evening hosted by Matthew E. White. Dates + live info below:

Out Her Space will be released 17th November on Bella Union.