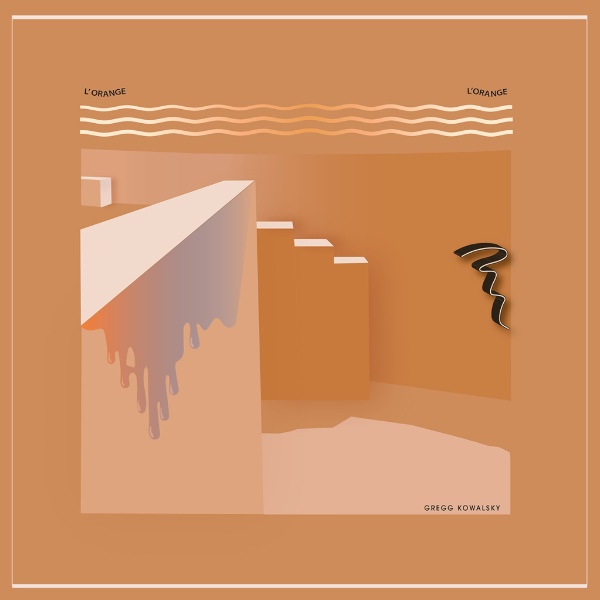 What does the sun sound like? ‘L’Orange, L’Orange’, Gregg Kowalsky (also of Date Palms)’s first solo album in eight years, might have the answer. Due out on November 10th via Mexican Summer, its vivid music – sourced from analog synths and mixed on a laptop – arrives in rays of sound that shine skyward. There are many moods in each track, but the overarching aura is one of brightness and optimism. Hence the album title, which nods toward the radiant hue of our life-sustaining star. “That’s the color I started to hear when I mixed these tracks,” Kowalsky says. “Mixing when it’s sunny out every day affects you.”

It’s not often that a drone piece starts an album off with a bang. But that’s exactly what the first track to be shared from the record, “L’Ambience, L’Orange” does. Opening his new full-length, the song starts as kind of gentle wake-up call, with thick, escalating tones that evoke time-lapse footage of a morning sunrise. The intensifying sound waves feel like they could go on forever, but after two and a half minutes, “L’Ambience, L’Orange” stops abruptly with a hard cut to silence. It’s a rather shocking move that sets a brave tone for the rest of ‘L’Orange, L’Orange’, an album in which Kowalsky reimagines ambient drone, refreshing it with a blissful, optimistic spirit.

“I didn’t want to just make an ambient record where every song fades in and out,” explains Kowalsky. “This song opens with pure bliss, and you’re in it, and time goes away. You’re wondering, ‘Am I thirty seconds in or 10 minutes in?’ Then it just cuts out. That edit is me saying, ‘Hi, I’m here again. Remember?’” It’s a fascinating way to jolt listeners out of comfort zones, but there’s more to the track than the sudden reminder of its creator’s hand. Kowalsky’s ending encourages you to play the song over and over, to revisit the intoxicating atmosphere that’s still ringing in your head after silence steals the scene. Repeat listens reveal new layers in “L’Ambience, L’Orange”, an homage to the life-sustaining sun that packs a universe of sound into just a few minutes.

Kowalsky knows sunny days. He was raised in Miami, and has lived in Los Angeles for the past three years. The warm atmospheres of those shining coastal cities infuse the luminous ambience of ‘L’Orange, L’Orange’. “After I had worked on this album for a while, I realized the music sounds like those places to me,” Kowalsky explains. “This record is basically about my connection to Florida and California – even the song titles reflect that.”

Don’t mistake the warmth for being placid, though. Kowalsky has no interest in creating background music, and there are moments throughout ‘L’Orange, L’Orange’ that surprise, confound, and provoke. The sunshine of‘L’Orange, L’Orange’ isn’t just about brightness and bliss. It’s also about engrossing your mind – creating an omnipresence not unlike that shiny orange orb whose ubiquity defines our days and whose absence fills our nights. For Gregg Kowalsky, music can have that same kind of overpowering effect. The sounds of ‘L’Orange, L’Orange’can calm your nerves, warm your mood, and maybe even enlighten your mind.