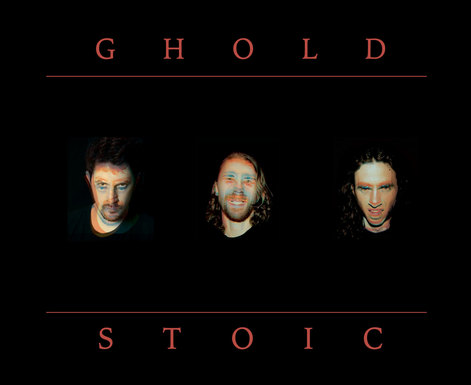 GHOLD ANNOUNCE NEW ALBUM STOIC; INCOMING 3 NOV VIA CRYPT OF THE WIZARD
WATCH GHOLD: NEW ALBUM TRAILER
GHOLD are to release their new album, Stoic via London based record store Crypt Of The Wizard on November 3rd.
Crypt Of The Wizard opened in March this year, and is quickly growing a reputation as a mecca for Heavy Metal maniacs. Stoic marks the shop’s first foray into releasing records themselves, born out of an appreciation for Ghold’s music, and for the wide range of different experimental and underground sub-genres lurking deep in the belly of the Heavy Metal beast.
GHOLD’s Stoic is a cyclical passage of conjured pain and affected affliction, an indifference to the circumstance of fortune, an uncertain testament of falling fever to love, loss and the human condition. An everyday blind search for meaning in a bittersweet world that has none. Happiness in melancholy.
Lyrics are the directive – the powerful chants are an insight to the vulnerability and loneliness of dealing with uncertainty, certainly. The drunken babble of the idiot savant humorously stumbling through his sudoric litany and exploring his foolish vision. Recorded in Leeds Unitarian Chapel in March 2017 by Tom Goodall of Mirror Man Recordings,Stoic smooths the jagged qualities of previous GHOLD albums. This time sounds entwine languidly and lusciously, allowing the 17th Century building’s acoustic properties to blend and shape them into life.
Equipment was stripped back – only instruments that were completely necessary were kept to let the band spout their truths and falsehoods without being cloaked behind a fug of bombast. The six songs range from blown out fist-pumpers through to drum-battery response “happenings” and ethereal electronic led drones, with an iron-core strength belying moments of subtlety and softness throughout. Stoic is GHOLD’s attempt to transcend into the next phase of their evolution, their most aphotic and intimate album to date, a sensatory elegy to grit your teeth to.

Words from the cover artist – Daniel Pickles
An impervious layer of ballistic pink permeates the void where the stoic rituals took place.
Is this the triptych Monolith diorama from your dreams? Candles burning an eclipse like puppets of your long lost lovers?
A Dalian optic view emerges. Its burning beeswax retinas and three Charcoal gnashers nestled in a gout gum become clear.
Is this a vision of your pinnacle self?
Or a portrait premonition of what not to become?
Upon a blackened Peggy sits a bust, your eyes adjust to his. No burning flame here. Just dark matter windows. Black, like the wicks extinguished and forgotten.
TRACK LIST:
Nothing Dreamt
Blue Robe
Ruptured Earth (Head In Sand)
Faeder Ure
SKHUL V
SKHUL VI
LIVE SHOWS:
Sep 23 Kamio at Red Gallery – London, UK (with Bong, Necro Deathmort, 11PARANOIAS, Bodies On Everest)
Sep 24 Magasin 4 – Brussels, Belgium
Oct 27-29 Fraternity Of Sound – Athens, Greece w/ Godflesh, Nurse With Wound, Ben Frost
Plus London release show to be announced
Stoic is to be released on November 3rd by the newly formed Crypt of the Wizard record label, and distributed worldwide by Plastichead.
Stoic is available as an LP in all good record shops (including the Crypt’s London shop and website), and as digital download.
WEBSITE | FACEBOOK | TWITTER