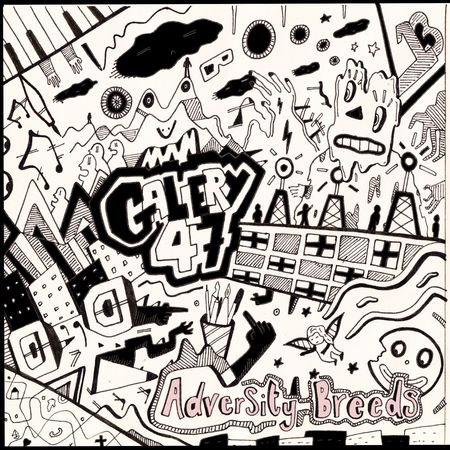 Alt-folk songwriter Gallery 47 aka Jack Peachey‘s colourfully political album, Adversity Breeds, is out now via Bad Production Records. It is available to buy on iTunes and stream on Spotify now.

To celebrate the release, the emotive new video for In Odessa premiered on For The Rabbits and is now available to watch on Gallery 47’s YouTube channel.

Jack explains “if Clean was the romantic album, Adversity Breeds is the divorce”. Influenced by a holiday row between Peachey and some family members who commented negatively on today’s youth, Jack combines real life events and fiction to create a captivating blend of upbeat, sentimental and bittersweet tracks. Each track on the album offers something poignant and different. Whether its the lighthearted nature of ‘Analytical & Open’ or the dark, brooding songwriting of ‘In Odessa’, Peachey continues to create soft, wistful tales of melancholy that are highly relatable. Jack maintains his signature soft, vibrato throughout whilst effortlessly blending his intricate guitar plucking and storytelling charm echoing Bob Dylan’s raw, colloquial writing style.

Over the past few months, Jack has also released stunning videos for Mr Baudelaire and Cold Fire as well.

Gallery 47 originally formed ten years ago as a six-piece band in Loughborough. Once the band went their separate ways, Jack decided to continue as a solo artist under the same name, becoming a regular on the live circuit in Nottingham and currently in his new home of South East London. Jack called upon a number of the same musicians who performed on Clean to play on Adversity Breeds, introducing a sense of familiarity to the latter, entwined with layers of texture and emotion throughout.

Amongst Jack’s supporters are BBC Radio 2‘s Bob Harris, BBC 6music’s Tom Robinson, The Guardian, Drowned in Sound, Clash and Folk Radio to name a few. Gallery 47 has also supported a number of well established acts like Paul Weller, Alice Phoebe Loe, Ian McCulloch and Andrew Montgomery as well as playing on the BBC Introducing stage at T in the Park.

With Adversity Breeds, Jack tackles the subject of standing up for a good cause whilst being rejected by those closest to you. A subject that is possibly at its most relatable now more than ever.

Adversity Breeds by Gallery 47 is out now via Bad Production Records. It is available to buy on iTunes and stream on Spotify now.