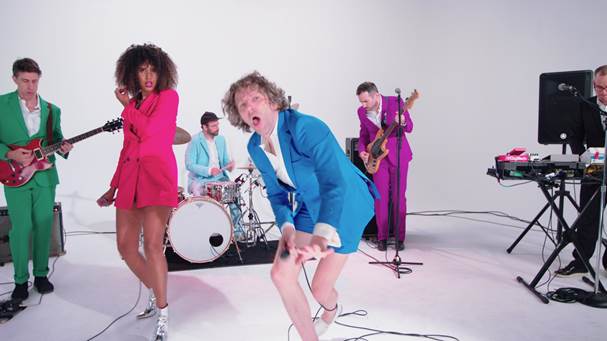 NEW ALBUM SHAKE THE SHUDDER OUT NOW ON WARP RECORDS

!!! (Chk Chk Chk) are known for their high energy, frenzy-inducing live shows, and have managed to take that formula and capture it in their newest video for the song “NRGQ”. In a spare setting, lead singer Nic Offer and vocalist Lea Lea, adorned in bright colors (and short shorts), mesmerize with an electric performance of the pulse-thumping track, supported by the relentless funk machine of the (equally short shorted) band.

“NRGQ” is featured on the band’s newest album, Shake The Shudder, out now on Warp Records.

he NYC dance-punk band has sustained an inimitable onstage energy over an extensive career spanning two decades, and continue to ignite audiences with one of the most dynamic live shows in modern music. Offer’s unpredictable personas and intoxicating dance moves consistently intrigue a steadfast and ever-expanding following. Recent events make clear that !!! are at the peak of their game. Make sure to catch them at one of their fall tour dates!

* with support from Algiers

Praise for Shake The Shudder:

“You don’t need to be a seasoned diva to join this party; just speak your mind and your ass will follow.” –  Pitchfork

“!!! are really back in groove” – Brooklyn Vegan

“a boundary pushing wall of synths and 90’s jungle” – MXDWN