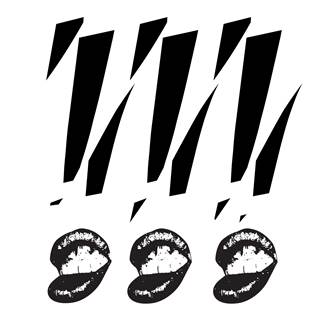 Just before their extensive fall tour, !!! (Chk Chk Chk) have announced a limited edition hand-stamped white label 12″ titled Shake The Shut Upand from it, released “The Long Walk.” The six-track collection echoes the excitement of its critically adored predecessor Shake The Shudder while celebrating the dance-punk band’s ever evolving energy. Shake The Shut Up is available only on the road.

!!! have an eventful tour in store, beginning tomorrow. The frenzy-prone performers have sustained a culture-shifting career for over two decades, and continue to ignite audiences with inimitable flare. According to Billboard, !!!’s recently released music video “proves that you can never really expect what will happen at a !!! show.”

* with support from Algiers

SHAKE THE SHUT UP TRACKLIST:

A1. Kim, Thurston and Me

A2. Charlotte All The Time

B2. Happiness Is A Warm Yes It Is

B3. The Long Walk