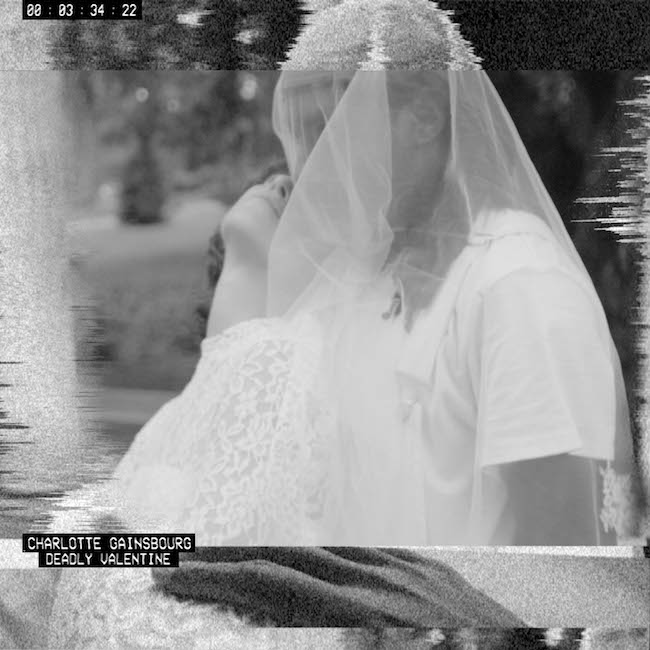 NEW ALBUM ‘REST’ OUT 17th NOVEMBER ON BECAUSE MUSIC

Charlotte Gainsbourg’s new single ‘Deadly Valentine’ is out today on Because Music. Taken from her forthcoming album ‘Rest’ (out 17thNovember), ‘Deadly Valentine’ is the follow-up to debut single ‘Rest’, which was released to widespread critical acclaim earlier this month. Featuring Dev Hynes (aka. Blood Orange), the ‘Deadly Valentine’ video was unveiled as part of a Dazed & Confused online and print takeover. Directed by Charlotte Gainsbourg and portraying romantic rites of passage with a dark twist, ‘Deadly Valentine’ can be viewed here:
“Each video came from personal, resonating ideas,” reflects Charlotte. “This song mixes wedding vows with an offbeat tone. I wanted to express the idea of a lifetime engagement; a couple running to church, from childhood to old age, a lifetime path. I asked my friend Dev Hynes if he would play my partner and he very graciously agreed. It was fun finding our younger and older selves! For my part, I had all I needed at home (with their consent of course!). I nearly asked my mother, but in the end, didn’t dare…”
‘Deadly Valentine’ will feature alongside previous single ‘Rest’ on an exclusive Rough Trade 12” EP out 29th September. Enjoying strong support at 6 Music, ‘Rest’ was described by Pitchfork as “a robot-disco banger turned inside out to suit Gainsbourg’s ghostly preoccupations” in their recent ‘Best New Track’ piece. In the stunning 10-page feature, which hit the stands this week, Dazed & Confused described the forthcoming album as “a chandelier made of strobe lights”.
Produced by Ed Bangers’ SebastiAn (Frank Ocean, Kavinsky) and mixed by Tom Elmhirst (Adele, Lorde, David Bowie), ‘Rest’ is Gainsbourg’s first studio album in seven years and features collaborations with Sir Paul McCartney, Daft Punk’s Guy-Manuel de Homem-Christo (Daft Punk), Connan Mockasin and Owen Pallett (Arcade Fire, Caribou).
The eleven essays on ‘Rest’ are nothing if not sure-footed, proffering a compelling fusion of gleaming, string-emblazoned modern electro-pop and cinematically textured avant-chanson – their magical music box melodies kissed by bruised, introspective, occasionally disquieting lyrics. The album opens with the nursery rhyme enchantment of ‘Ring a Ring a Roses’, a hazy mosaic of nostalgic childhood snapshots, and ends with the electro-disco-flavoured ‘Les Oxalis’. In between, there’s ‘Lying With You’, whose busy drums and angular synths frame a lyric about Serge Gainsbourg’s death, the frank, self-examining ‘I’m a Lie’ and the wonderfully Giorgio Moroder-esque ‘Deadly Valentine’, whose lyrics, essentially a string of uncannily delivered wedding vows, play out against a motorik Euro-disco beat and soaring strings.
Another essay, ‘Songbird in a Cage’, was penned for Charlotte by Sir Paul McCartney, no less. “We had a very nice lunch about six-and-a-half years ago”, she recalls. “I told him that if he ever had a song for me it would be a dream come true. A few weeks later he sent this track. It was a demo. I didn’t know what to do with it, because I wanted it to be part of the album. We had to reinvent it. Paul very sweetly came to Electric Lady. He did a bit of piano, some bass, a bit of guitar. It was incredible, just to see him work”.

The aides-de-camp may have played their role on Rest, but it remains undeniably the work of a singular artist. “This time it felt like flying on my own. I knew I needed the right collaborator, and SebastiAn was always there, but all the same, this time the album is really mine”.