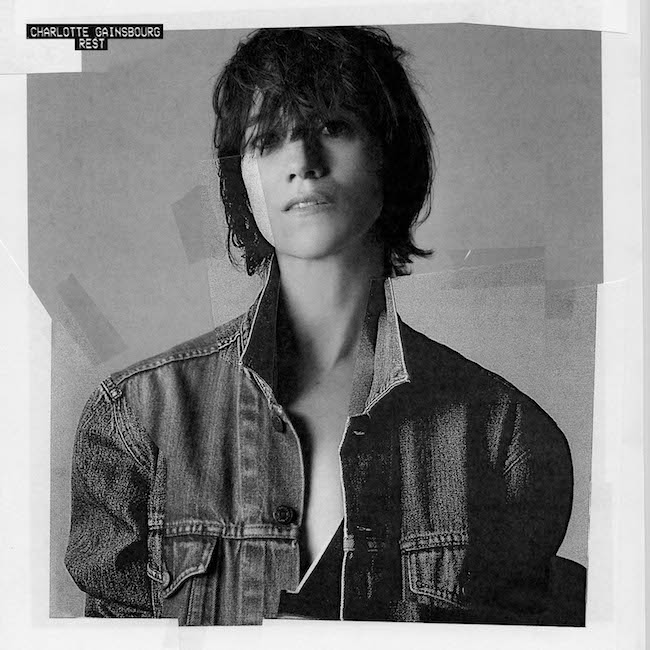 Available now on iTunes, the title track is accompanied by a singular and engaging montage video, directed by Gainsbourg herself, which is previewing exclusively on Apple Music today.

Commenting on the video, Charlotte explained, “I needed a push and Lars (Von Trier) was there to help. At first I asked him if he would direct the video for me. He answered, ‘no… you should do it!’ Understanding what I required, he instructed ‘I will tell you exactly what you must do’ and precisely dictated ‘the rules’ which I had to follow. I nodded throughout our phone conversation while writing down the master’s principles. And that was it – the initial push I needed to go out and use the camera myself. Taking possession of the imagery, I was able to reflect my personality in the archive footage I selected or the new images I filmed. With this first directorial step, I created a repetitive language via a musical loop. I applied a similar approach to videos for other songs on the album.”

Having previously written lyrics with Jarvis Cocker and Air on ‘5.55’ (2006) and Beck on ‘IRM’ (2010), ‘Rest’ is the first album where Gainsbourg penned all the words. Feeling daunted by the desire to poetise her ideas, deliverance would arrive initially courtesy of Guy-Manuel de Homem-Christo, who provided the music for the title track, steering Charlotte toward a forensically focused approach to lyric writing. “Those were the first words that I actually sang on the album. I came in with all my bunches of lyrics… It was too much, really, and Guy-Man was saying, ‘you can’t say all that, you have to simplify it,’ and he reduced it to three words! It felt so innocent in a way, but it was exactly what I needed at that time”. On the album, Gainsbourg addresses personal topics ranging from the death of her father Serge and more recently sister Kate Barry, to the tensions between her shyness and her life as a performer and public figure, to charmingly illogical childhood fears.

The album’s major production lynchpin would be French DJ, remixer and producer Sebastian Akchoté-Bozovic, aka SebastiAn, best known for his releases on French house label Ed Banger and for his production work for Frank Ocean. His background in electronic music accorded with Charlotte’s desire for a sound with a disquieting, mechanistic edge, inspired by Giorgio Moroder and, perhaps unsurprisingly for a revered, award-winning film actress, movie soundtracks, particularly Pino Donaggio’s score for Brian De Palma’s ’70s horror classic Carrie and Georges Delerue’s music for Jean-Luc Godard’s nouvelle vague masterpiece Le Mepris, as well as the chilly, unsettling ambience of films like Stanley Kubrick’s The Shining and Hitchcock’s Rebecca.

The eleven essays on ‘Rest’ are nothing if not sure-footed, proffering a compelling fusion of gleaming, string-emblazoned modern electro-pop and cinematically textured avant-chanson – their magical music box melodies kissed by bruised, introspective, occasionally disquieting lyrics. The album opens with the nursery rhyme enchantment of ‘Ring a Ring a Roses’, a hazy mosaic of nostalgic childhood snapshots – the verses delivered in intimately captured French, the instantly infectious chorus in coolly clipped English – and ends with the electro-disco-flavoured ‘Les Oxalis’ (named after the eponymous woodland flower). “Those two songs were always the bookends of the album”, Charlotte explains. The latter’s rhythmic energy cuts against the lyric, describing a lachrymose promenade through a cemetery. “I remember SebastiAn asking, ‘Are you sure that’s what you want to say against that rhythm?’ But that’s how this album made sense to me, in the contradiction between things, with the music taking you somewhere and the words going the opposite way”.

It’s a potent dichotomy that permeates much of ‘Rest’, from ‘Lying With You’, whose busy drums and angular synths frame a lyric about Serge Gainsbourg’s death (“Like everyone who’s gone through this, you have to deal with the memory of someone who is still alive in your head, and the way you’ve seen them dead. I wanted to talk about the crudity of this”, explains Charlotte), to the frank, self-examining ‘I’m a Lie’ (“…about not knowing if you’re able to collapse or fly. It’s something that I’m always wrestling with”), and the wonderfully Giorgio Moroder-esque ‘Deadly Valentine’, whose lyrics, essentially a string of uncannily delivered wedding vows, play out against a motorik Euro-disco beat and soaring strings.

Another essay, ‘Songbird in a Cage’, was penned for Charlotte by Sir Paul McCartney, no less. “We had a very nice lunch about six-and-a-half years ago”, she recalls. “I couldn’t believe that I was actually sitting next to him. I told him that if he ever had a song for me it would be a dream come true. A few weeks later he sent this track. It was a demo. I didn’t know what to do with it, because I wanted it to be part of the album. We had to reinvent it. Paul very sweetly came to Electric Lady. He did a bit of piano, some bass, a bit of guitar. It was incredible, just to see him work”.

The aides-de-camp may have played their role on Rest, but it remains undeniably the work of a singular artist, one who has explored her personal darkness in pursuit of a sense of purpose and a place of resolution, purging herself of creative shyness and timidity in the process. “This time it felt like flying on my own. I knew I needed the right collaborator, and SebastiAn was always there, but all the same, this time the album is really mine”.