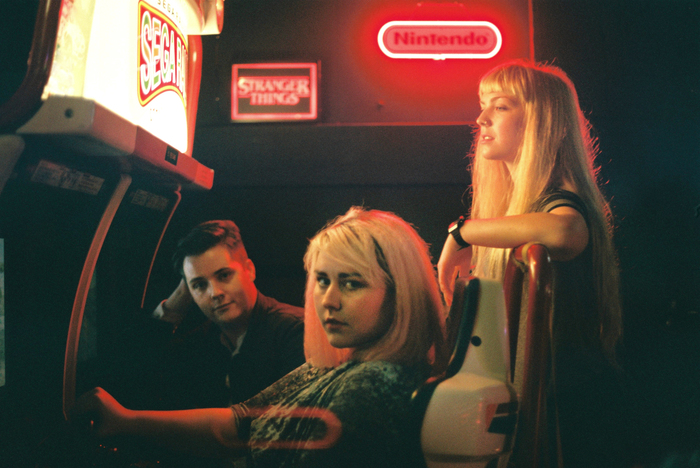 Beauty Sleep
Belfast synth-pop trio share new single “Until We See The Sun” via Clash
“Until We See The Sun” is the new single from Beauty Sleep, which was premiered via Clash, who wrote “Fuzzy basslines combine with sweetly beguiling vocals, as Beauty Sleep once more capture that certain innate charm only they can provide.” With sparkly synths, catchy melodies and chunky guitar riffs, the track is a sure fire indie disco banger, with a danceable beat that is ripe for the most dazzling of parties.
The song is about secrets; leading a double life and the idea that at night the darkness gives a sense of freedom to be oneself. It explores a secret relationship that finds it’s own illicit existence at night. The song reflects on the thrill of nocturnal rendezvous in clubs and bars, hiding in plain site, knowing that in the morning they have to appear nothing had happened.
Musicians, producers and artists Cheylene Murphy, Ryan McGroarty and Aimee Williamson joined forces to form Beauty Sleep after a houseparty bonding session spelling out rude words on a fridge-magnet-crossword. They honed their sound in their home studio, creating a synthy, pop-hook haven that Two Door Cinema Club, Phoenix and Chvurches fans will fall in love with.
Beauty Sleep have self-released three debut singles, “Living Right”, “The Dark” and “All In”, all of which have received unanimous support from UK and Irish radio such as BBC Radio One, 98FM, TXFM and Amazing Radio. Both “Living Right” and “The Dark” were named ‘Track Of The Day’ on BBC Radio Ulster’s Across The Line. The band have been featured in Hot Press magazine, The Irish Times, Indie Shuffle, Clash Magazine and many other blogs from New York to Tokyo, with The Dark charting at number 11 on Hype Machine’s ‘No Remixes’ chart.
Beauty Sleep have been busy since they launched in early 2016, touring their “hip-swinging, rip-roaring” live set around Ireland playing shows and festivals such as Electric Picnic, The Great Escape, Castlepalooza, Stendhal Festival and Other Voices, and headlining venues such as Whelan’s in Dublin, Bar Sub and Black Box in Belfast.
Fusing the sounds of dream-pop synths, super fuzzy bass and delicate vocal lines, their forthcoming EP, Nature Will Eat Me is set to be their most eclectic mix yet.