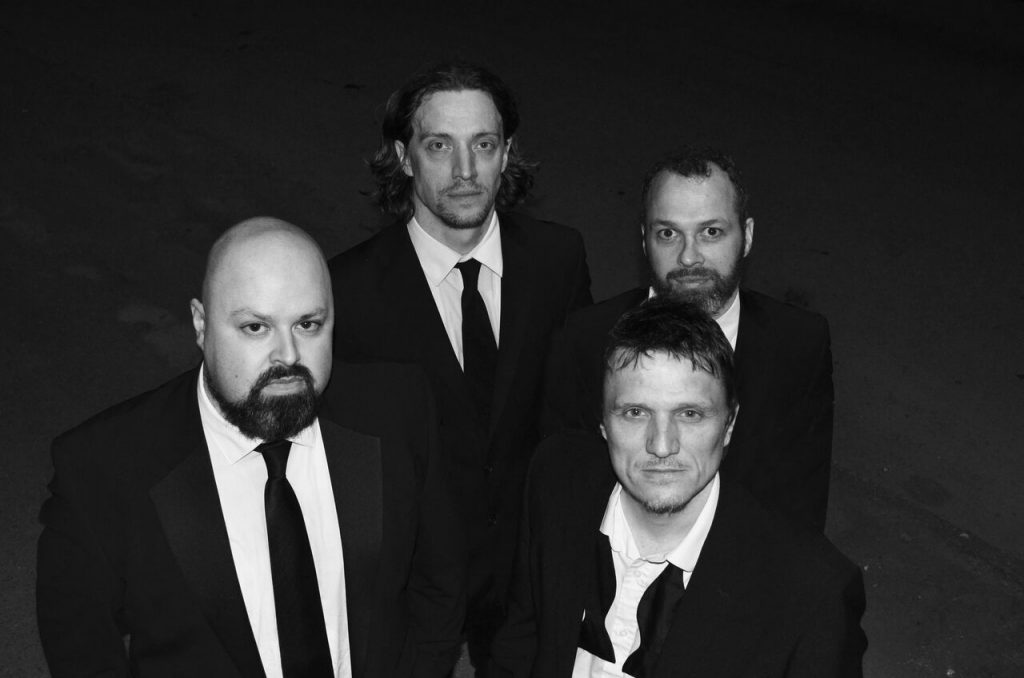 Fucked up times demand a fucked up response. Unfortunately, every Tom, Dick and Tarquin wants to form an angry metal band and most of them are about as scary as a cheese sandwich. As a result, the return of unhinged weirdo riff warriors Barrabus to the live circuit should be a cause for mass celebration.
Fronted by swivel-eyed polymath Paul Catten, they are simply one of the gnarliest and most distinctive bands to emerge from the UK underground over the last 20 years and they will be touring the UK over the next few months. This band of beautifully besuited bastards first appeared as a brief but thrilling flash in life’s shitty pan a decade ago, popping up as main support to My Ruin, SiKth and several more notables, but then promptly disappeared in a puff of noxious disdain. Gloriously, the best ideas absolutely refuse to.
As furiously fresh and snot-fuelled today as they were when they were first penned, the songs on Barrabus’ self-titled debut album are nothing short of an all-out, vein-bursting assault on the senses. A lurching, flailing blur or fuzzed-up sludgecore riffing, art rock angularity, whiplash-inducing detours and thick wads of acrid, squirming eccentricity, it’s a powerful metal record, but one infused with an exhilarating sense of unease and malicious mischief. Most importantly, perhaps, Barrabus sound nothing like anything or anyone else, not least due to the unique lyrical vision and vocal madness of their frontman. On their upcoming live shows Catten comments:
‘Have to say we are extremely excited about going back out and playing some live shows again. The fantastic response we have had since the album was a bit of a kick in the ass for us really, so with new drummer Jim in tow we have been rehearsing like mad. Safe to say we have never sounded better, and the B vibe is still feels as mental as it ever was. Really looking forward to seeing everyone at the shows, its great to be playing some places where we have always had a good time before. So get your suits ready, the best dressed band in rock are back!!’
UK shows:
Sept 30th – Barnsley, Old School House  (w/ Servers)
Oct 12th – Worcester, Firefly
Oct 20th – Birmingham, Asylum (w/ Kroh)
Nov 1st – Camden, Underworld (w/ Mutation)
Nov 3rd – Leeds, Belgrave Music Hall (Damnation Festival pre-show)
Nov 11th – Newport, Le Pub
Dec 1st – Cheltenham, Frog and Fiddle
Dec 2nd – Southampton, Firehouse
Barabbus released their self titled album in June via Undergroove Records. Order now –
https://www.facebook.com/UndergrooveRecords/

This is without doubt of the best albums of the year – 9.5/10 – Ghost Cult Magazine