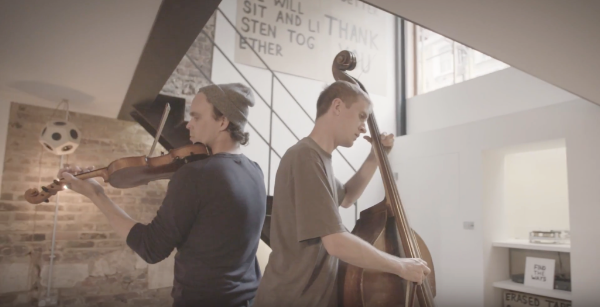 Following the release of their stunning album “Find The Ways” earlier this year on Erased Tapes Records, Peter Broderick and David Allred (aka Allred & Broderick) will perform a string of shows across the UK over the next week.

The dates take in performances at Erased Tapes’ tenth birthday celebrations in London and Bristol as well as headline dates in Glasgow and Manchester.

Catch a glimpse of what to expect from the duo’s stripped back, spellbinding live show in the first of a new series of sessions, filmed at the Erased Tapes Sound Gallery in East London.

Allred & Broderick met in 2012, when David wrote to Peter saying that he had transcribed Broderick’s piano song “Pulling The Rain’” and wanted to know if he would take a look to check it for accuracy. Having always wished to have written scores for his piano songs, this initial gesture caught Broderick’s attention. In 2013, they both found themselves living in Oregon, and began working on music together.

Armed with nothing but their voices, a violin and an upright bass, they began their journey to create an album as minimal as possible. Recorded in Peter’s studio The Sparkle on the Oregon coast, the pair used this solitude to focus on creating something completely raw and honest – something often so unattainable during a time where complexity is sought most.

In a world full of noise and the anxieties of every day life, ‘Find The Ways’ brings us together and reminds us to appreciate and confront the fundamental facts of life, and know that we, as individuals, will eventually find our way.

Stream ‘Find the Ways’ in full on Spotify here.
Watch the official video for “The Ways” here.