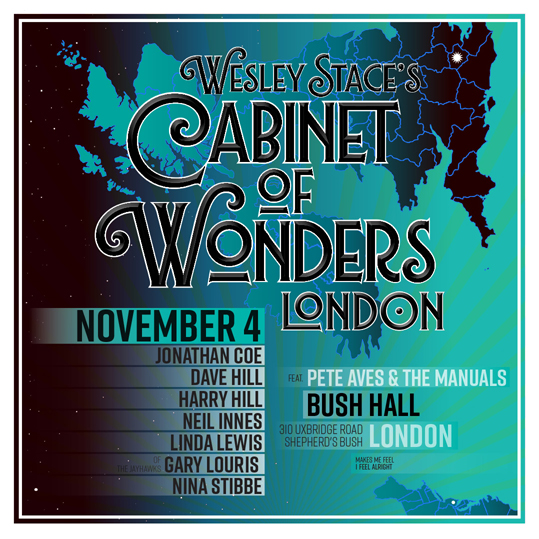 We are excited to announce the following line-ups, assembled by the novelist and singer-songwriter formerly known as John Wesley Harding, for the London return of his NYC-based Cabinet of Wonders show.

Also featuring Pete Aves & The Manuals – the guitarist from The High Llamas provides the house band.

And MC/Kabinettmeister Wesley Stace – This Sussex-born “renaissance man” (The New Yorker) bestrides the literary and musical worlds like a slightly camp colossus.

Wesley Stace’s new album, recorded with alt-country legends The Jayhawks was released by Yep Roc in February of this year.

“The Cabinet began as a way of bringing together my writer friends who often envy my musician friends with my musician friends who sometimes envy my writer friends and the comedians who generally envy – and are envied by – both of them”, Stace explains. “Basically, it’s only things I love. You can have your own show, and this is mine. Over the years the shows have established a convivial atmosphere all of their own – Harry Hill likened it to the Alternative Cabaret of our youth – and I can’t wait to bring that mood back to London.”

Since 2009, Wesley Stace’s Cabinet of Wonders has established itself in America as an exciting stage for prominent and emerging voices in the worlds of music, literature and comedy. The November shows represent the most astounding amalgamation of cross-disciplinary star quality gathered under one roof since the first two London Cabinets at Cecil Sharp House in 2015 and 2016.