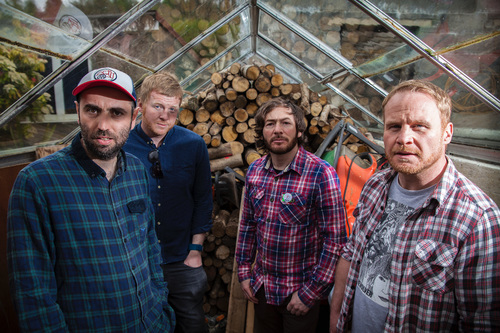 El Goodo
Reveal video for “It Makes Me Wonder” via Clash
New album By Order Of The Moose due out on 8 September
via Strangetown Records
Watch video for “It Makes Me Wonder” here
https://youtu.be/vq27wwtEkvg
Clash magazine has shared the video for El Goodo’s new single “It Makes Me Wonder”, saying they; “know their way around a perfect melody… matching 60s girl group classics against their world-weary Welsh sound.”
The track is taken from the forthcoming album By Order Of The Moose and is their interpretation of 60s girl groups, as singer and guitarist Pixy Jones explains; “On the demo I sampled the drums intro of “Be My Baby” by the Ronettes. Matty commented that the drums sounded good, how did I get that sound? I told him that I played it in the kitchen on various saucepans and he believed me.”
Due out on Cian Ciaran from Super Furry Animals’ Strangetown Records on 8 September, the album By Order Of The Moose was recorded over the course of 8 years in an old derelict cinema in their home village of Resolven, the album is a continuation of where the band left off in 2009 with their previous effort Coyote. Wielding the wide open spaces of spaghetti westerns with the close melodic harmonies of girl groups and the good humour of Nuggets inspired garage rock’n’roll, El Goodo takes you on a trip through their fascination with 60s music.
Comprised of brothers Elliott (drums, percussion) and Jason Jones (guitar, vocals), Pixy Jones (guitar, vocals, keyboards), Lewie Sewers (guitar), Matthew Young (keyboards) and Andrew Cann (bass), El Goodo (named after a Big Star song) are a band enthralled by the past. They recorded the album on a 16-track with a small collection of faulty equipment, creating a collection of melodic pop songs, embellished with strings, brass, sitars, harmonicas, xylophones and vocal harmonies (and then seemingly covered it all with dust), that you’d expect to find on some forgotten 60s record that someone has stumbled upon in their attic.
From the first recording in November 2008 with the track “When”, the album took eight years to complete. Initially thinking it would only take them a few months, they set out to record at The Music Box in Cardiff. Two years later they decamped back to their village, to the Resolven Miners’ Welfare Hall.
Despite the sheer length of time and the difficulties encountered, with By Order of The Moose El Goodo have achieved something extraordinary. The album is fully realised, cohesive and demonstrates the band’s incredible knack for catchy hooks, eloquent songwriting and terrific arrangements. By taking an odyssey through the music of the past, they have shaped a sound that is both timeless and points towards a promising future.
“Combining 60s garage, surf and pop with spaghetti western soundscapes and psych, El Goodo often sound like a chipper Lee Hazlewood and fun-loving Coral. Joyous music, brilliantly produced, sung and coated in a diverse mix of 60s shapes and sounds.” Record Collector 4*s
“Psych-pop dappled interpretation of a 60s girl group song that shimmers with summery orchestration reminiscent of Love and the Byrds-esque harmonies.” God is in the TV
Buy/Download single “It Makes Me Wonder” here:
Spotify: https://open.spotify.com/album/7zmS3PKTck20X3yIxyOvCz
Juno: https://www.junodownload.com/products/el-goodo-it-makes-me-wonder/3487884-02/
Watch album trailer video for “I Sit And Wonder”
https://youtu.be/cBCuycMndn0

El Goodo
By Order Of The Moose
8 September
Strangetown Records
1. I Sit And Wonder
2. It Makes Me Wonder
3. September
4. Sail The Ocean
5. So It Goes
6. Five In The Morning
7. Heavy On My Mind
8. Susan & Bill
9. When
10. It’s All Over
11. Lay It On My Honey
12. As You Said your So Longs
https://www.facebook.com/elgoodomusic/
https://www.facebook.com/strangetownrecords/