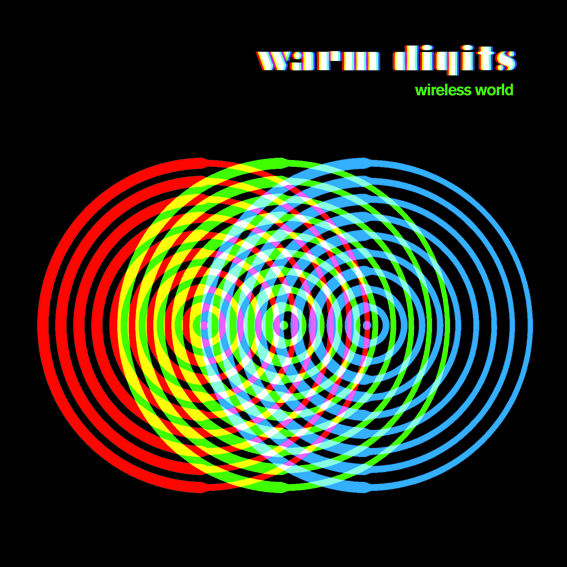 Electronic duo Warm Digits, aka Newcastle based Andrew Hodson and Steve Jefferispremiered their new single, “Growth of Raindrops” feat. Sarah Cracknell today on the Radcliffe & Maconie show on BBC Radio 6Music and also on Clash Music.  On their latest single, Sarah’s vocals invokes nature’s habit of being persistently poetic and beautiful despite our best efforts to get rid of it.

“”Growth of Raindrops” is one of the motorik–powered, hyper-melodic songs from Wireless World, and had existed as an instrumental live favourite for some time before we recorded the album.”  Steve Jefferies explains, “We’d struck up a friendship with Saint Etienne after Bob Stanley asked us to help soundtrack the documentary film he made with artist Esther Johnson, called Asunder, and later supported Saint Etienne at Sage Gateshead, where we first met Sarah.  When drawing up our wish-list of guest vocalists for the album, Sarah was a front-runner as we’d been big fans of the lush electronic pop of Saint Etienne since the year dot, and we were delighted she was up for a collaboration. Sarah’s vocal amplifies the melodic energy of the song, and takes the album’s theme of environmental jeopardy to narrate a tale of nature, loss, beauty and ambivalence.”

Warm Digits will be on tour from next month which includes a London date at The Lexington on 25th August, as well as performances at Green Man and Manchester Psych Fest.

Wireless World is loosely themed around a present-day that teeters between progress and collapse. The band explain: “Our experience of the world and our states of mind are shaped and thrilled by unimaginably exciting leaps in technology, and yet that world will only last for a few moments as we fail to find a way to act collectively on rising temperatures, the failures of democracy and the unstoppable hunger for exploitation of the ground under our feet. This record is our attempt to make music from our experience of this present that teeters between celebration and devastation.”

In addition to Sarah Cracknell lending her vocals to “Growth of Raindrops”, elsewhere on Wireless World there are guest appearances from Peter Brewis of Field Music,  Mia La Metta from Beards and Devon Sproule.

Warm Digits are the Newcastle-upon-Tyne duo that, in the words of legendary DJ/producer Andrew Weatherall, create “Machine funk kraut-a-delia – it’s rather lovely!”.  Their brew of live drums, guitar and electronics betray a love of Neu!, Kraftwerk, Giorgio Moroder, My Bloody Valentine and Boards Of Canada. Motorik percussion, electronic basslines, Keith Levene-style guitar chops and squelchy analogue warmth are accompanied by live visuals in performances that have graced the Psych Fests of both London and Liverpool, seen them support the likes of Goblin, Modeselektor, ESG, St. Etienne, Moon Duo and many more, toured the UK with British Sea Power and blown the audience away at Supersonic and many other festivals. Their blistering live sets of “krautophonic blizzard-wave” have to be seen to be believed.