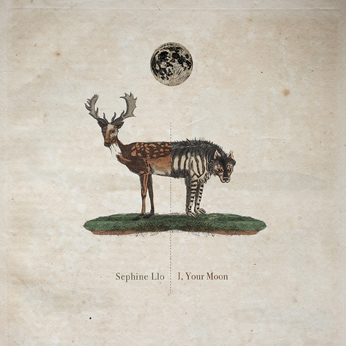 Following the release of her First To Tarnish single (July, 2017), Sephine Llo announces details of her forthcoming debut album I, Your Moon (out 27 October via Tape Club Records), and shares second album teaser Lover Shaped My Name via Soundcloud and Spotify.

Sephine Llo’s I, Your Moon is a debut album of wonder and beauty. A blend of gentle melancholia taking its roots from folk, but layered with electronic glitches and distortion. A sound blanketed in a rich tapestry of multi-instrumentation and unique compositions. It’s a sound that at its most ethereal recalls the majestic heartbreak of Alela Diane (such as the aforementioned soulful First To Tarnish or the fragile Lover Shaped My Name). On other songs, there’s moments reminiscent of Bjork on her more opaque and unconventional compositions,  with a glitchy heart pumping an electronic warmth throughout.

Sephine Llo is British wunderkind Josephine Lloyd-Wilson. She accelerated through the classical music circuit at an early age (classically trained as a violinist, pianist and singer); received a first class degree at the world-renowned Tonmeister course at University of Surrey (alongside the likes of Brit and Mercury Prize winning Charlie Andrew); won two awards in compositions and the AMS Neve prize for creative recording, and has worked at both Westminster Abbey (as a classical performer) and Abbey Road (session musician).  She then began experimenting with sound sources, recording the noise of day-to-day objects and self-teaching herself to play more unusual instruments such as kora and sanxian. These new sonic adventures were married to Sephine’s unconventional song-writing style and unique, often choral-esque vocal performance, with early whispers noting her similarities to one-woman pioneering artists such as Kate Bush and Joni Mitchell.

After releasing her debut Flame EP (2014, Tape Club Records) – which saw Sephine featured on Wonderland and 405, played on BBC3 Late Junction and Radio X Xposure, and perform at Wilderness festival – Sephine began work on her debut album I, Your Moon. However, the release of the long-player was sadly delayed when Sephine’s husband and musical collaborator Robert Lloyd-Wilson (of Autumn Chorus) was diagnosed with cancer. After a two-year battle, and only a few weeks after discovering they were expecting their first child, he tragically passed away.

Now I, Your Moon is set to be finally released on 27 October via Tape Club Records (CD/Vinyl/Cassette/Digital) and can be pre-ordered via iTunes. The album is written, recorded, produced (in the main) and mixed by Sephine Llo, but pays homage to Robert Lloyd-Wilson, who contributed backing vocals and some co-production. The release also proves a cathartic experience for Sephine, as she explains:

“The album now represents a bridge over the journey from when we found each other through our music, to the turbulent feelings that now shape my days.”

7. Vertigo and the Torchbearer

“This album is dedicated to my husband and soulmate, Robert Lloyd-Wilson (Autumn Chorus), who erased the pain that inspired these songs.”  – Sephine Llo

Watch the ‘Making Of’ Radkey’s mindblowing claymation video for Glore