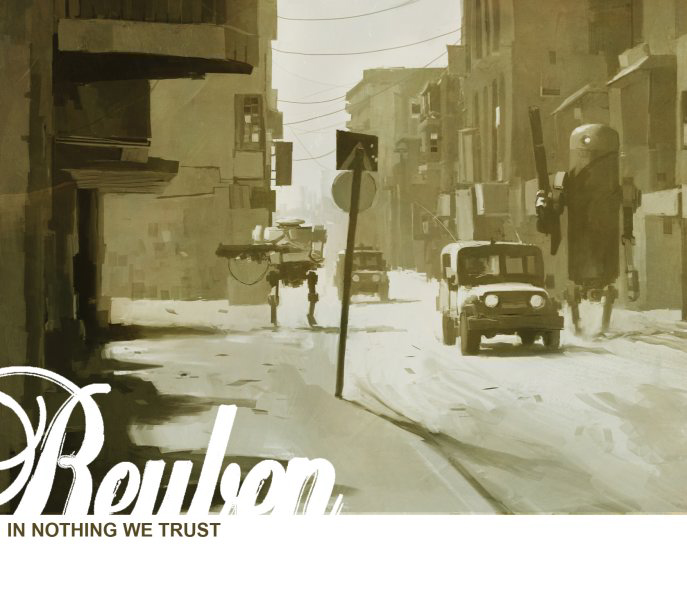 In Nothing We Trust (Tenth Anniversary Reissue)

In their relatively short career Reuben made a big impact on the UKs alternative rock scene with three well received albums that were both eclectic in style and vital sounding. The third (and sadly final) of these albums, In Nothing We Trust is now celebrating a decade since its release and has been reissued for the first time on vinyl and in digital form to commentate this anniversary and the album sounds just as fresh as it did upon its relaxes in 2007 and shows the band hitting their peak.

In Nothing We Trust kicks off the hazy Cities On Fire, a song that starts off in a way reminiscent of Vs era Pearl Jam interspersed with that more aggressive, almost math rock sound, a sound that in Reuben‘s hands sounded immense and eclectic and as a opening, this set the scene well for the rest of the album.
It is the albums eclectic nature that is its real triumph with the band creating different sounds throughout the album and it is to their credit that they did this so effortlessly.

From the furious energy of We’re Going Home In An Ambulance to the epic grandness of Suffocation Of The Soul to the groove of Deadly Lethal Ninja Assassin (a song that features vocals from band friends Frank Turner and Hundred Reasons Paul Townsend), this was the sound of Reuben making the album they always wanted to make. Add to this the jagged nature of An Act Of Kindness and Crushed Under The Weight Of Enormous Bullshit, the sublime Good Luck (a song that features the gorgeous vocals of Hannah Clark from Arthur), the catchy and quirky rock of Agony/Agatha and the brilliant trio of songs that closes the album in the sussed rock of Three Hail Marys, the thunderous Blood, Bunny Larkhall and the dirty but catchy A Short History Of Nearly Everything you have an album that demonstrates the vitality of Reuben and is a fine send off for the band.

While the band did indeed split up after the albums release, their influence lives on in a whole host of British alt rock bands and the rhythm section of Guy Davis and Jon Pearce are members of the brilliant Freeze The Atlantic while guitarist Jamie Lenman has recently started a solo career after a long hiatus from the music business meaning that we can still experience the talents of the band. For the ultimate Reuben fix, turn In Nothing We Trust up loud, revel in their finest moment as a band and marvel at how good a band they were.

In Nothing We Trust Reissue– Out Now Via Big Scary Monsters http://www.bsmrocks.com/products/596379-reuben-in-nothing-we-trust-lp-preorder