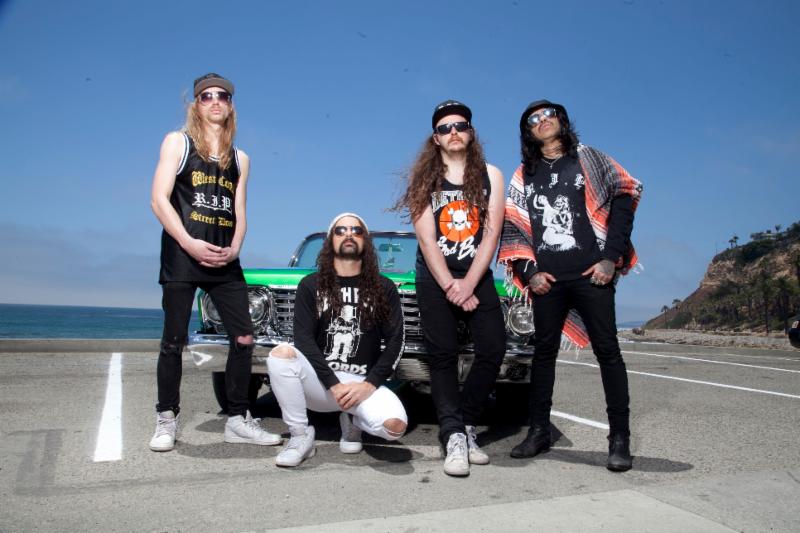 “R.I.P. nails down that slower heaviness of classic doom bands, yet bares its teeth like a punk band –hence, street doom.” — Metal Injection
“Stepping into a cassette-era theatricality that suits the rawer production almost surprisingly well, R.I.P. finding a place for ’80s and early ’90s nostalgia that’s not overblown would-be glam or retro-minded thrash, but would nonetheless fit well on a bill next to Slayer during their big-hair days, despite the obvious sonic discrepancies.” — The Obelisk
Portland, OR ‘Street Doom’ quartet R.I.P. shares a new track from their forthcoming sophomore album Street Reaper today via The Obelisk. Hear and share “Unmarked Grave” whilst reading editor JJ Koczan’s astute observations HERE
Metal Injection recently shared lead single “The Other Side” HERE. (Direct YouTube HERE.)
When R.I.P. came crawling out of the sewers of Portland, OR last year, their grimy, sleazy Street Doom was already a fully formed monstrosity that quickly infected the minds of everyone it encountered. Now, borne from the band’s declining state of mental health and increasing focus on songwriting, Street Reaper is an even more unhinged and menacing album than their 2016 debut In The Wind.
Borrowing equally from 80s Rick Rubin productions and Murder Dog magazine aesthetics, Street Reaper is a streamlined, yet brutally raw manifesto of heavy metal ferocity hearkening to the era when both metal and hip hop were reviled as the work of street thugs intent on destroying America’s youth.
Throughout, Angel Martinez’s guitar and John Mullett’s bass are inextricably interlocked, sounding like a massive sonic steamroller, while drummer Willie D keeps the beat solid and simple for the most powerful impact. And, the band’s extensive touring and excessive virgin sacrifices have clearly endued singer Fuzz with evermore agile vocal chords to drive it all home with extreme precision.
Operating on the belief that doom is not tied to a tuning or a time signature, but rather a raw and terrified feeling, R.I.P. eschews well trodden fantasy and mysticism tropes of the genre and focuses on conveying the horror and chaos inherent in the everyday reality of the human mind. With several years of touring under their heavily studded belt, R.I.P. has distinguished themselves from the interchangeable hordes of bands trying to play heavy metal by crafting an aesthetic and a sound all their own, focusing on the things that make metal heavy rather than adhering to the formulaic confines of a particular sub-genre.
Street Reaper opens with the knockout punch of “Unmarked Grave” and the rest is just sheer bludgeoning for bludgeoning’s sake as the album echoes the grimy vibe of legends like Saint Vitus, Pentagram and Motorhead, with the no b.s. aesthetic of the early Metal Massacre compilations.
Street Reaper will be available on LP, CD and download on October 13th, 2017 via RidingEasy Records.