UK’s most fire-driven progressive metal quintet OHHMS have announced a significant batch of festival and club shows to take place in Europe this fall. Not to be missed.

This European tour is in line with the widely acclaimed release of their debut album “The Fool” this spring on Holy Roar Records. Praised across the globe as “the real deal” (Metal Hammer), “a ultra-heavy, emotionally-charged debut album” (Kerrang) or “the kind of album that elevates a band to greatness” (Terrorizer), it has elevated the UK five piece to a whole new level since their 2014 beginnings.

After a long run of UK dates alongside Hark and Bossk, OHHMS are set to mesmerize European crowds for the first time in 2017, as well as thousands of metal connaisseurs at the likes of Desertfest Belgium and Into The Void Festival. See full list of shows below:

If you missed out on their video for “The World” directed by Daniel Waverley Gray, then it is time to catch up now. Debut album “The Fool” is still available on Holy Roar Records and Bandcamp. 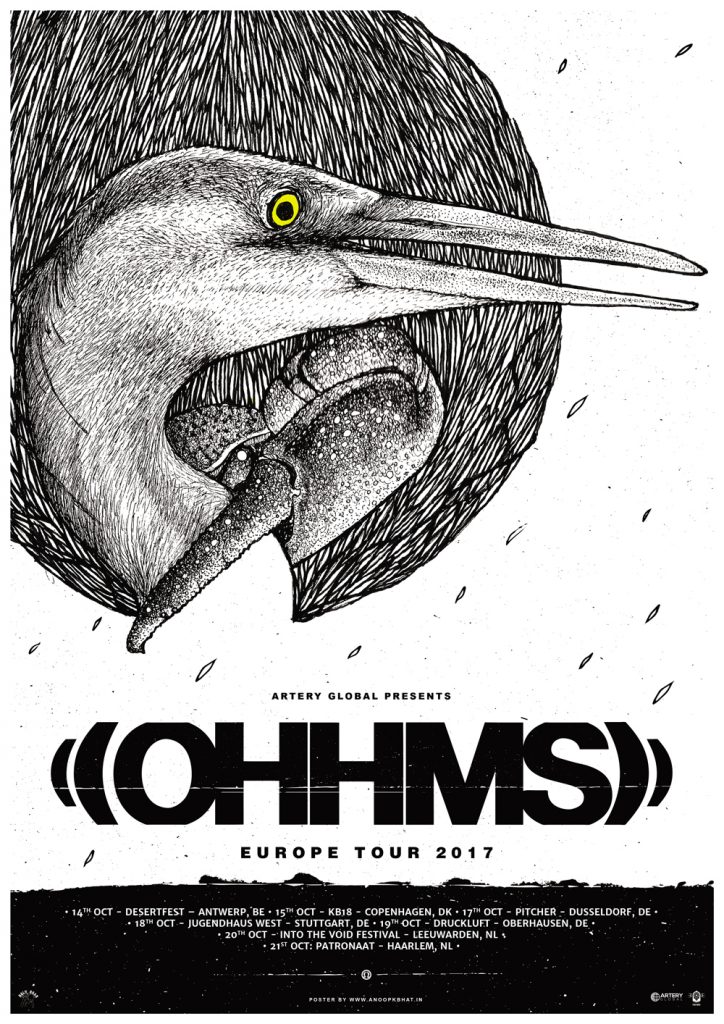 Armed with the thickest riffs and fieriest will, OHHMS formed in 2014 in Kent, UK. It didn’t take long for the five-piece to come up with two stellar EPs “Bloom” (2014) and “Cold” (2015), both released on London-based extreme music powerhouse Holy Roar Records. Clocking in at over thirthy minutes, each EP unfolds with two monolithic, angst-ridden tracks, blending the downtuned approach of doom metal with more progressive, eerier landscapes. On top of this distinctive approach in songwriting, vocalist Paul Waller maintains maximum adrenaline levels by alternating sumptuously deep gravelly singing, his warrior bellows and roar-is-war call to arms.

As fearless explorers of the heavy music scope, OHHMS quickly built a strong reputation among the UK’s underground scene, which led them to play major events such as Desertfest, ArcTanGent, Bloodstock, Damnation, Incubate and many others. Three years after their thunderous beginnings, the band is back in March 2017 with their debut full-length “The Fool” on Holy Roar Records. True to themselves, OHHMS continue their boundary-free ascension in quest of the sonic panacea, more determined than ever to brand minds with their cathartic, transcending creations.