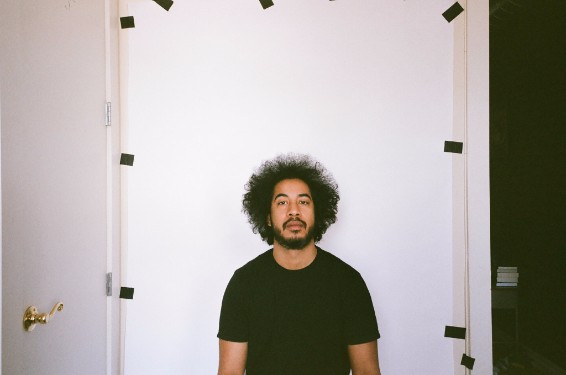 Shows Announced with Washer and Melkbelly

Maneka is the solo project of Devin McKnight (Grass Is Green, ex-Speedy Ortiz), a consistently enormous force in every band he’s played in. Is You Is, the project’s debut EP, marks the first time McKnight is handling the entirety of the songwriting and vocals. Having recently shared “Tiger Baby”  and “Dracula”  , today sees the premiere of “Power” via GoldFlakePaint. The single features guest vocals from Fern Mayo’s Katie Capri, floating together with McKnight’s lower registers.

GoldFlakePaint shared, “a dense space where McKnight’s blurry vocal swims beneath Katie Capri’s more pertinent and infinitely brighter voice. Always battling against a heavy backdrop of skewed guitar noise, the track is anything but presentable and yet it willfully digs itself in, wrapping a darkness around the listener that becomes more palpable with each passing minute.”

Speaking about “Power,” Devin said, “It’s about being dependent and feeling slave to my psychiatric medicine. It’s also about taking ownership of my situation despite feeling like I’m not really in control of my own emotions all the time. Sometimes there’s great power in just saying no to something or ending a toxic situation on your terms.”

“McKnight shows off his uncanny ability to navigate a four-minute song with shape-shifting guitar. After rumbling along for two minutes, we’re treated to chugging metallic buildup and a heroic closing solo” – Billboard

“Glimmering like heat-haze rising from a piping hot pavement, and swooping into a shoegazey new direction” – DIY Mag

Maneka’s debut album, Is You Is, is Devin McKnight’s (Grass Is Green, ex-Speedy Ortiz) first solo album, a record the deals with themes of independence, self empowerment, urgency, and ownership. Self described as “future-space alien-dream-post punk,” McKnight leaves behind years spent playing the role of guitarist to create his own project, writing every instrumental and vocal part on his own before sharing it with a collective of friends and collaborators. Singing is “a very new adventure” for McKnight, prepping with a few vocal lessons from his Aunt Cheryl to get his confidence up and hacking away at it. Vocals aren’t the only first, McKnight also wrote the drums parts, programming them with Ableton and drum samples for Maneka’s original demos. Mike Thomas (Grass Is Green, Empress Of) joined McKnight to play drums on the album, sticking with the framework built on the demos while adding a flair that only he can.

The inspiration for Maneka began after a prolonged time away from the road following years of touring. Creatively restless, McKnight started realizing a lot of the music scenes/spaces that he’d been apart of we’re very white. McKnight often felt himself losing his own cultural identity, and the seeds of his own project were planted. He very quickly realized the best way to speak to this experience was to do it on his own. Inspired by Rob Crow, Deftones, Jimi Hendrix, former bandmates (Sadie Dupuis, Two Inch Astronaut) and tour mates (Alex G, Ovlov), McKnight has found his own voice, creating unique melodies and blistering guitar lines that represent both experimental punk, syrupy harmonies, and a sense of McKnight’s own independence.