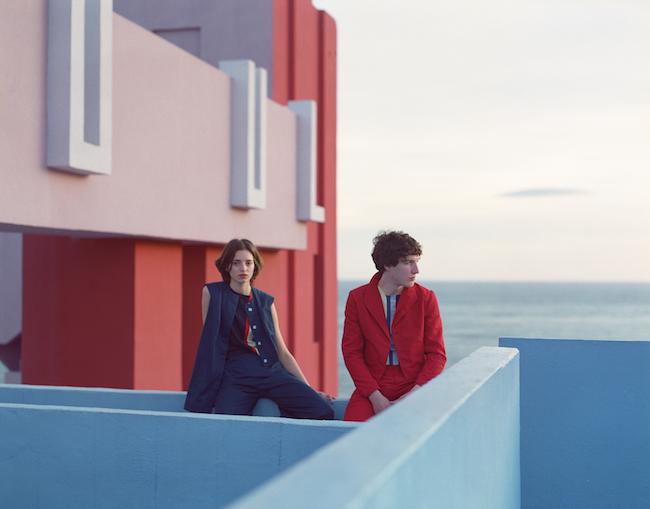 LIVE AT THE THE PICKLE FACTORY, LONDON ON 14 SEPTEMBER

Park Hotel are a post-electronic dance band based in London, UK. Centred on the creative duo of Tim Abbey and Rebeca Marcos-Roca, they explore the mirrorball-noir territory between alternative arena electronica and wired downtown songwriting.
Ahead of their live set at Bestival and their newly announced headline show at The Pickle Factory, Park Hotel have now shared the video for their new single ‘Going West’. The video is a collaboration with artist Henry.
WATCH ‘GOING WEST’ VIDEO: https://youtu.be/5Egzg0nRa5s
HEAR ‘GOING WEST’ ON SOUNDCLOUD AND SPOTIFY
Park Hotel play:
Sunday 10 September – Bestival – Dorset, UK
Thursday 14 September – The Pickle Factory – London, UK – TICKETS
Live their metropolitan disco-rock studio incarnation expands into a steamroller six piece neo-funk band, featuring three-way vocal harmonies, two guitars, drums, percussion, keyboards and ample cowbell. They sound like a joyfully communal face-off between LCD Soundsystem and Earth, Wind & Fire with flashes of Talking Heads and even a sprinkle of Steely Dan.
Park Hotel first entered a recording studio in 2016 to work with producer Eliot James on two tracks ‘Gone As A Friend’ and ‘other tracks, handing them over for mixing to Nathan Boddy and mastering at New York’s Sterling Sound. After playing a series of feverishly received under-the-radar London shows in Autumn 2016, the band released their debut single ‘Gone As A Friend‘ earlier this year. An album of immaculate dance-craft waits in the wings. Reserve rooms early for 2017.
BUY ‘GOING WEST’ on Apple Music | iTunes
www.parkhotelband.com