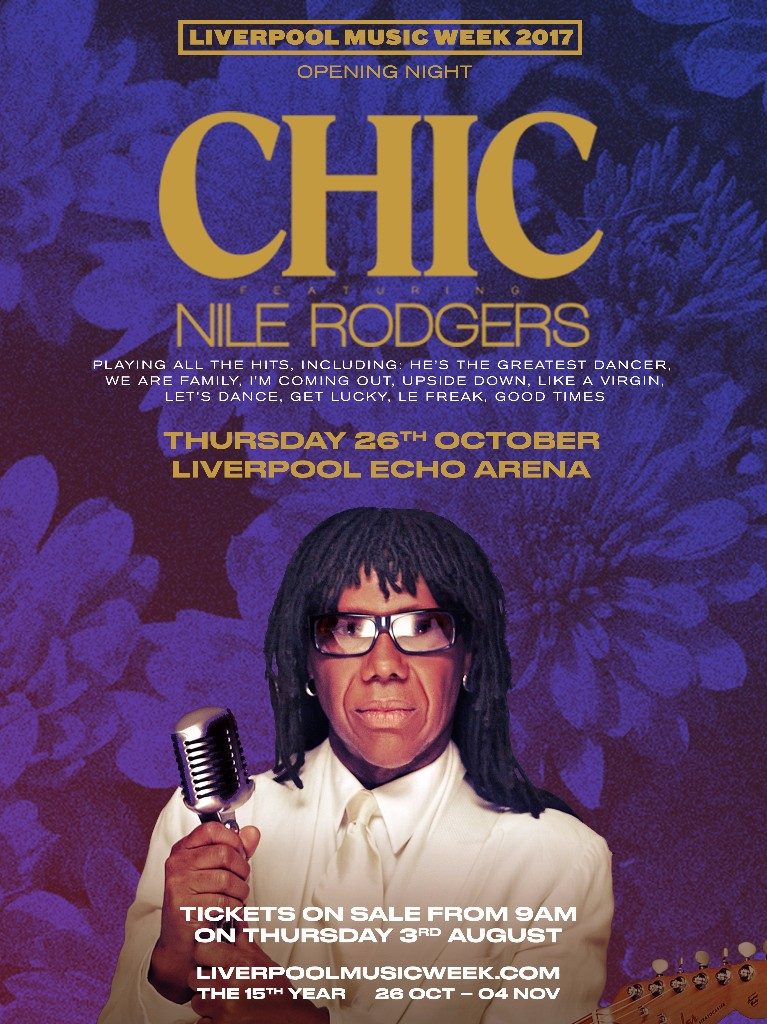 Liverpool Music Week are delighted to announce that disco legends CHIC feat. NILE RODGERS will headline the 15th Anniversary Year Opening Night Party of the prestigious Liverpool-based metropolitan music festival on 26th October 2017, in an extremely special performance at the Liverpool Echo Arena for the most exciting Opening Night Party the festival has seen to date, at one of the city’s biggest venues.

Liverpool Music Week was recently crowned Best Metropolitan Festival at the UK Festival Awards 2016, and the Opening Night Party will be CHIC feat. NILE RODGERS’ first show in the city in over four decades. Among music legends, Rodgers is truly exceptional. He amplifies his legacy as a multi-Grammy-winning composer, producer, arranger and guitarist by constantly traversing new musical terrain and successfully expanding the boundaries of popular music.

Commenting on the news, Festival Director Mike Deane said: “It’s been quite the journey since starting Liverpool Music Week as a single venue venture back in 2003, but there’s no doubt that today is our single proudest moment as we announce CHIC & Nile Rodgers as our 2017 headliners. There aren’t many individuals in music who compare to their legendary status, importance, and continued iconic relevance. We are utterly thrilled that both Nile and the band have agreed to join us this year. There really isn’t a live music show quite like CHIC, and we can’t think of anyone better to open this milestone year.”

Incredible value at just £65, full LMW17 Wristbands giving access to all shows, as well as all individual show tickets go on sale 9am Thursday 3rdAugust 2017.

All tickets will be available from: www.liverpoolmusicweek.com

Also joining the bill on the first wave of announcements are London electronic duo MOUNT KIMBIE whose performance is the first date of a tour promoting their forthcoming new album Love What Survives which features collaborations with King Krule and James Blake.

Motown-infused London indie pop quintet CHILDHOOD will be gracing the stage of Buyers’ Club, whilst fellow indie darlings GENGAHR will be showcasing their otherworldly take on the genre at The Magnet, andPRINCESS NOKIA joins us for an exclusive UK show outside of London from this New York City-based independent alternative hip-hop and R&B star, lauded as one of the most important artists out there right now.

Elsewhere at the Liverpool Guild of Students, the legendary LMW Closing Night Party returns for what’s sure to be another sell out. British grime MC AJ TRACEY will be showing Liverpool why The Guardian listed him as “one of the best new acts to catch at festivals” last year, PERFUME GENIUS graces us with his debut Liverpool performance following one of the year’s most critically lauded album releases, and ZOLA JESUS returns for her first Liverpool show in 6 years to promote her new album Okovi, released this September on hugely well-respected label Sacred Bones in their 10th anniversary year. A very special headline artist for the Closing Night Party will be announced over the coming weeks.

Finally, returning once more is the much-loved ‘BREAKING OUT’ series in partnership with DIY. Always one of the most popular parts of LMW in recent years, it has seen the likes of The Big Moon, Dream Wife, Let’s Eat Grandma and more take to the stage. Taking place at the new home of EBGB’s the first acts announced are: GIRL RAY, GOAT GIRL, SPINNING COIN and LITTLE CUB.

This year, LMW17 will run from Thursday 26th October – Saturday 4thNovember 2017 and will once again be utilising Liverpool’s ever-growing arsenal of venues, with the Invisible Wind Factory hosting two of the biggest shows this year, as well as some of its lesser-known hidden gems and secret live spaces, proving beyond a doubt that there’s something special happening on the banks of the River Mersey, and bringing national attention to this bustling hub of creativity.

2016’s leg of LMW drew over 12,000 music fans together for a celebration of Liverpool’s vibrant and ever-changing music scene, and in 2017 the festival continues to showcase a mix of the finest in world renowned touring artists and the best in upcoming local talent, as well as the thriving musical community here in the North West region.