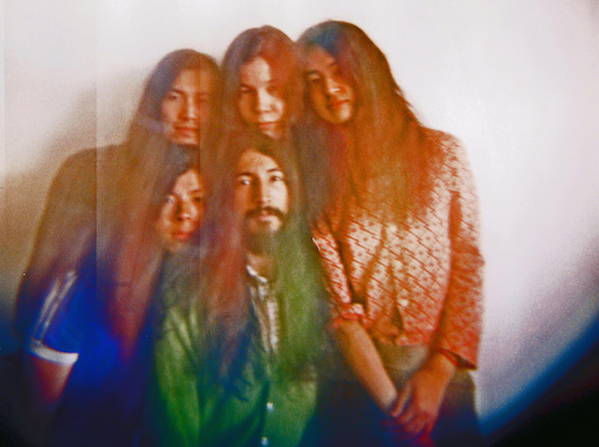 Following June’s sold out show at London’s Moth Club, Tokyo’s Kikagaku Moyo are preparing to return to the UK for a string of shows over the next few weeks.

Starting with a headline show at London’s Corsica Studios next Wednesday, they will play shows across the country, including an appearance at Green Man Festival.

Kikagaku Moyo (translated as “geometric patterns”) started in the summer of 2012 busking on the streets of Tokyo. Though the band started as a free music collective, it quickly evolved into a tight group of multi-instrumentalists. Their sound encompasses a broad spectrum of influence & elements of classical Indian music, Krautrock, traditional folk, and 70s Rock. Most importantly, their music is about freedom of the mind and body, and building a bridge between the supernatural and the present. Improvisation is a key element to their sound.

They run their own record label, Guruguru Brain, focusing on releasing underground artists from Asia, including Kikagaku Moyo. Earlier this year, they released a new EP, ‘Stone Garden’. Compared to last years relatively song-based album ‘House In The Tall Grass’, ‘Stone Garden’ is a window into Kikagaku Moyo’s more experimental side. This record enabled the band to experiment not only with instrumentation but also atonality and a playful approach to mixing. The unexpected results have become five unique songs each woven together through the same process.