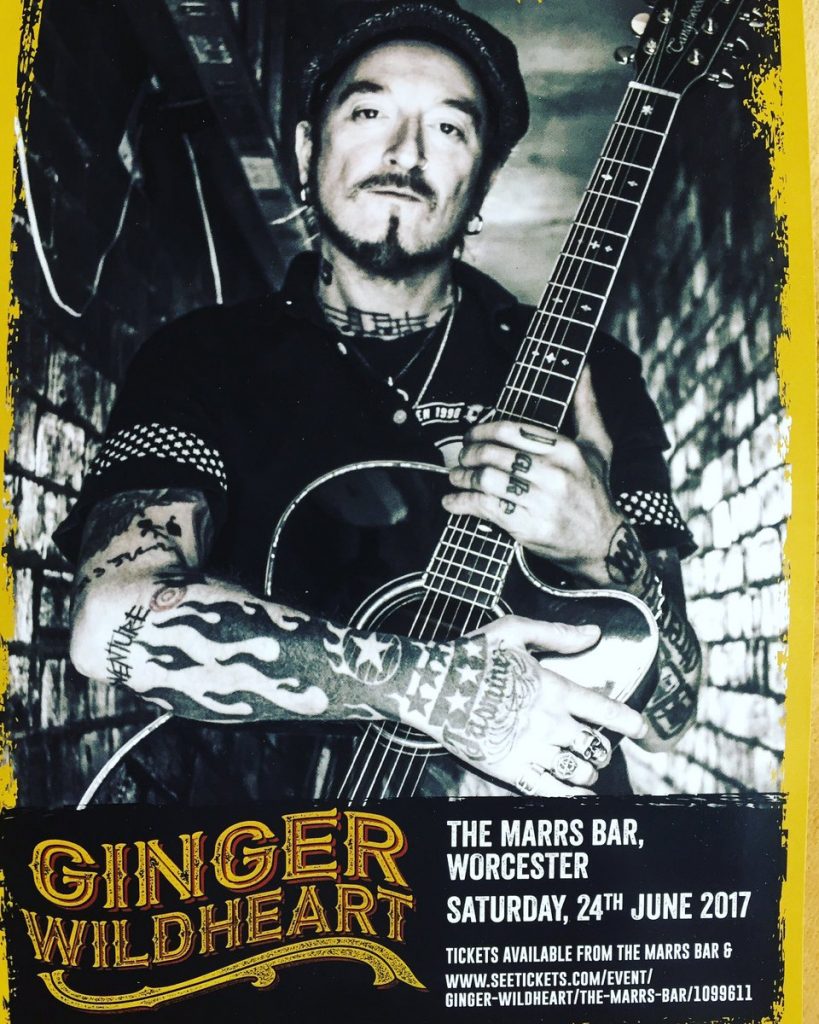 Throughout his extensive and storied career, Ginger has proved himself to be one of the best songwriters and storytellers that this country has ever produced and that is a statement not to be taken lightly but it’s the truth. From his time in The Wildhearts and Hey! Hello! to a huge variety of side projects that cover everything from metal to country, the one thing that has shone through is his knack for writing quality songs. That knack is best demonstrated through his work as a solo artist and this acoustic gig is what we got when we witnessed him in the intimate surroundings of the Marrs Bar. The perfect venue to get up close and personal to hear him belt out songs from all areas of his career.

First up tonight is support act Rev who warms up the crowd greatly, the singer and guitarist (who in the past was a founder member of Towers Of London and also had a guitar playing stint with the Prodigy as well as time in Hey! Hello! alongside Ginger,) cuts a mean figure with his all in white sharp dressed attire and slicked back hair looking not unlike Social Distortion main man Mike Ness in his prime and cranks out a set of no nonsense acoustic rock n roll aided by his talented band and they get the crowd in the mood for a night of singalong action. His years as a performer have paid dividends as this is a laid back but urgent performance by the singer and the crowd are as appreciative by the performance as the singer is by the applause.  Rev ends his set with a couple of classic covers of The KKK Took My Baby Away by the Ramones and Johnny Cash’s Folsom Prison Blues (the man in white covering the man in black!) and perfectly sets the mood for tonight’s headliner.

With the audience suitably warmed up, Ginger makes a typically very low key entrance as he perches on a stool with his guitar and this just adds to the intimate feel, it’s like having the singer play a show in your living room such is the eye he places upon his audience and you just know that you’re in for a treat tonight. Aided onstage by Wolfsbane man Jase Edwards on guitar, Stix on cajon and the enchanting voice of Sophia Vassalsos, Ginger greets the crowd like long, lost friends and proceeds to deliver an enthralling set that is high on energy, laughs and overall, just great songs.

Opening with brilliant new song The Daylight Hotel from his upcoming Ghost In The Tanglewood album, Ginger sang his heart out and everything that followed was more like a party than a mere gig.  Ginger invites local singer Givvi Flynn (who has worked with Ginger in Hey! Hello! before as well as his confidantes in Dowling-Poole) onstage and this just adds to the fun atmosphere with her vocals bolstering the already impressive noise from the stage.  Songs from his solo career like I Need You are played with passion and the crowd respond in kind, roaring the lyrics back at a happy looking Ginger who regales the them with anecdotes galore before mining more musical gold.  Flynn returns to the stage to help out on some Hey! Hello! songs which sound great in a live environment. Forever Young (dedicated to the memory of lost friends Lemmy and Bowie) and a storming Burn The Rule (complete with an appearance from Rev) both sound immense and are just more examples of the songwriting ability of Ginger and the joyous atmosphere around the venue is infectious.  The set finishes brilliantly with two Wildhearts songs in Top Of The World and finally with a boisterous singalong of the classic 29 X The Pain and as the last notes of the song escape into the night, everyone leaves the venue with a smile on their face, happy that they gave witnessed something great.

Ginger had said before that the last time he played in Worcester was one of the worst gigs of his career but he definitely set that straight at the Marrs Bar tonight with a triumphant performance that nobody in attendance will forget in a hurry.