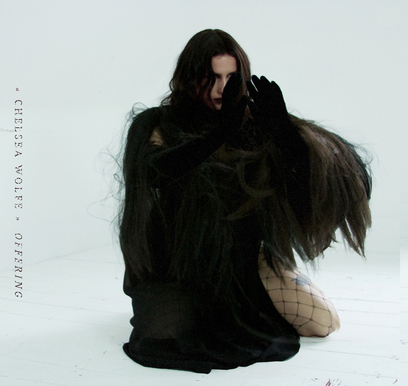 CHELSEA WOLFE SHARES ATMOSPHERIC NEW SONG “OFFERING“,
HISS SPUN IS OUT SEPTEMBER 22ND ON SARGENT HOUSE
Chelsea Wolfe will be releasing Hiss Spun, her highly anticipated follow up to Abyss, on September 22nd on Sargent House. Today she has shared “Offering,” a new single that emphasises the electronics and atmosphere, and reflects the album’s themes of finding inner peace while the world spirals. “A thousand lives lived in circles, a planet burning at the seams. Skeletal sand as a lesson that became an offering,” sings Wolfe.

Chelsea Wolfe also recently shared a video for “16 Psyche”, directed by Zev Deans, The video’s dark stylistic flourishes throw back to alt-rock music videos around the turn of the millennium, influenced by classic clips by Deftones, the Smashing Pumpkins, Nine Inch Nails, and more. The video features Troy Van Leeuwen of Queens of the Stone Age, who appeared in many similar videos of the era. Watch “16 Psyche” here.

What I want is to open up. I want to know what’s inside me. I want everybody to open up. I’m like an imbecile with a can opener in his hand, wondering where to begin—to open up the earth. I know that underneath the mess everything is marvelous. I’m sure of it.” – Henry Miller