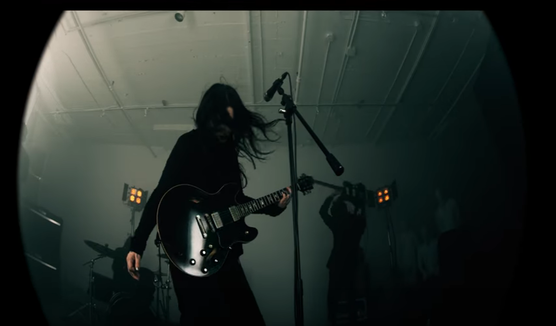 Chelsea Wolfe has shared a new video for “16 Psyche,” the acclaimed lead single from her upcoming album Hiss Spun, due out September 22nd on Sargent House. Directed by Zev Deans, the video is a throwback to a now-classic era of metal and alt-rock music videos around the turn of the millennium. The video features Troy Van Leeuwen of Queens of the Stone Age, who appeared in many similar videos of the era. The video premiered this via Noisey with an interview with Wolfe.

“The album is cyclical, like me and my moods,” Wolfe says of Hiss Spun. “Cycles, obsession, spinning, centrifugal force—all with gut feelings as the center of the self.” And it’s an album that Wolfe sees as a kind of exorcism. “I’m at odds with myself…I got tired of trying to disappear. The record became very personal in that way. I wanted to open up more, but also create my own reality.”
Every Chelsea Wolfe album is cathartic, but never before has both the artist and her audience so desperately needed this kind of emotional purging. Sargent House is proud to release Hiss Spun to the world on September 22nd, 2017.