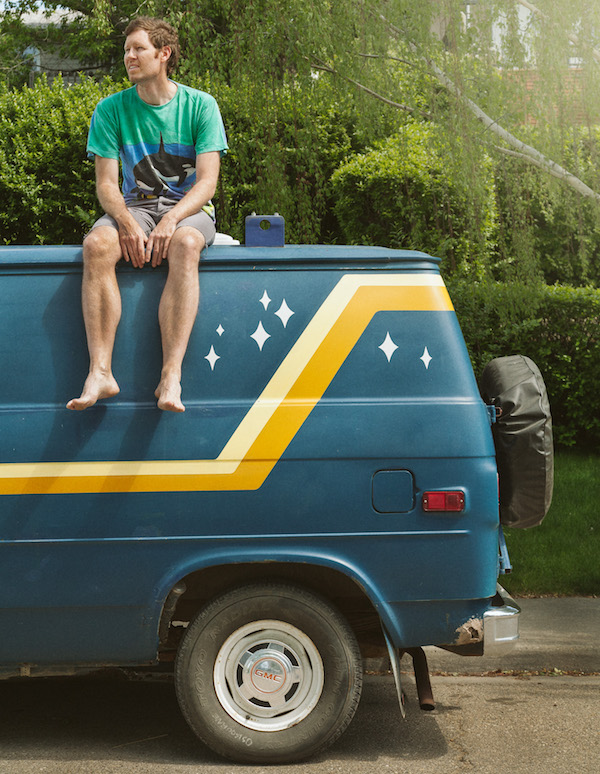 Chad VanGaalen has shared “Mind Hijacker’s Curse”, another highlight from his forthcoming sixth album, ‘Light Information’, which comes out on September 8th via Sub Pop (Flemish Eye in Canada).

VanGaalen says of the song: “Mind Hijacker’s Curse is the outcome and side effect of vacationing inside of another organism’s consciousness. Once we can do this, I see the potential to forget your physical self and just live inside of some other beings mind. Hook me up to the fungal web that allows entire forests to communicate. I imagine the dolphin package would be very popular…”

For an album that’s about “not feeling comfortable with really anything,” as VanGaalen says, his sixth album, Light Information, is nonetheless a vivid, welcoming journey through future worlds and relentless memories. Throughout the dark-wave reverb of Light Information are stories of paranoia, disembodiment, and isolation–but there’s also playfulness, empathy, and intimacy. The rich soundscapes and sometimes jarring imagery could only come from the mind of a creative polymath–an accomplished visual artist, animator, director, and producer, VanGaalen has scored television shows, designed puppet characters for Adult Swim, directed videos for Shabazz Palaces, Strand of Oaks, Tanya Tagaq, METZ, Dan Deacon, and The Head and the Heart, and produced records for Women,Alvvays, and others.

As always, VanGaalen wrote, played, and produced all of the music on Light Information at his home studio in Calgary, Canada, (save Ryan Bourne’s bass part on “Mystery Elementals” and vocals on “Static Shape” from his young daughters Ezzy and Pip). And of course he designed the cover art and animated the official video for “Pine and Clover”.

‘Light Information’ will be available on CD / LP / DL / CS on September 8th in Canada via Flemish Eye and the rest of the world through Sub Pop. It’s available for pre-order now from Sub Pop and Flemish Eye. LP pre-orders from megamart.subpop.com and select independent retailers will receive the limited Loser edition on crystal clear vinyl (while supplies last). There will also be a new T-shirt design available. The limited Loser edition LP will also be available from select UK independent retailers on clear vinyl. Additionally on September 8th, Sub Pop will repress VanGaalen’s ‘Infiniheart’, his beloved and long out of print (on vinyl) 2005 debut on 2xLP and Turquoise vinyl.  And, now at long last, Chad VanGaalen’s discography (‘Shrink Dust’, ‘Infiniheart’, ‘Skelliconnection’, ‘Soft Airplane’, and ‘Diaper Island’) is available for the first time time on Bandcamp.