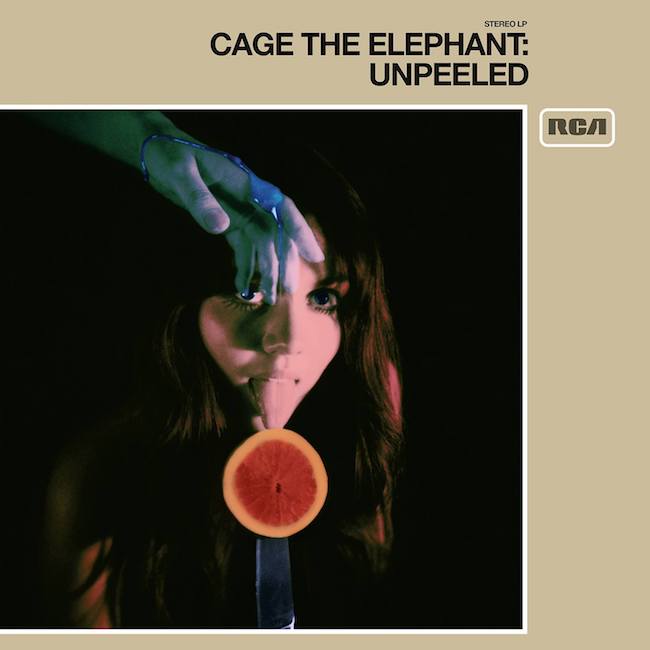 NEW ALBUM ‘UNPEELED’ OUT NOW VIA RCA RECORDS
21 LIVE VIDEOS RELEASED
2017 GRAMMY WINNER ‘BEST ROCK ALBUM’
GRAMMY® Award winner Cage The Elephant‘s new album ‘Unpeeled’ is out now on RCA Records.
LISTEN TO ‘UNPEELED’ HERE
To commemorate the release of the album, Cage The Elephant have rolled out 21 live performance videos worldwide, one for each songon ‘Unpeeled’.  Highlights include premieres of  ‘Rubber Ball‘ on Rolling Stone, ‘Cry Baby‘ on Entertainment Weekly, ‘Trouble‘ on Flaunt,’Punchin’ Bag‘ on Consequence Of Sound, and their covers of Daft Punk and Julian Casablancas’ ‘Instant Crush‘ on NME, Wreckless Eric’s ‘Whole Wide World‘ on Consequence of Sound, and The Strangler’s ‘Golden Brown‘ on Billboard.
WATCH ALL OF ‘UNPEELED’ VIDEOS HERE
The new album was recorded over a series of intimate shows in cities including Los Angeles, Washington DC, Knoxville, and Nashville where the band performed in a stripped down arrangement with a string quartet and additional percussion. ‘Unpeeled’ features twenty-one tracks: eighteen curated songs from their past four albums plus three reimagined versions of existing songs. Said front man Matt Shultz about the inspiration behind the album: “Many times you’re adding sonic layers looking for something to hide behind, and what you don’t realize is that that vulnerability and that nakedness might be the most compelling and interesting thing about the song.” Preorder the album here.
Recently, Cage The Elephant appeared on Late Night With Seth Meyers to perform the Unpeeled versions of “Whole Wide World” and“Too Late to Say Goodbye”.
Cage The Elephant received their first GRAMMY® AWARD for Best Rock Album for their fourth studio album, Tell Me I’m Pretty, which was produced by Dan Auerbach of The Black Keys.
Cage The Elephant consists of singer Matt Shultz, guitarist Brad Shultz, drummer Jared Champion, bassist Daniel Tichenor, lead guitarist Nick Bockrath and Matthan Minster on keyboard and backing vocals. Long celebrated as one of the most explosive live bands in the world, Cage The Elephant have sold out several headlining runs including a summer 2016 arena tour and recent sold out UK and European tour. Additionally, Cage The Elephant’s self-titled debut album was recently certified RIAA platinum.
www.cagetheelephant.com
www.facebook.com/cagetheelephant
www.twitter.com/cagetheelephant
www.instagram.com/cagetheelephantofficial
BUY ‘UNPEELED’
iTunes – http://smarturl.it/UNPEELEDi
Apple Music – http://smarturl.it/UNPEELEDa
Spotify – http://smarturl.it/UNPEELEDsp
Amazon – http://smarturl.it/UNPEELEDaz