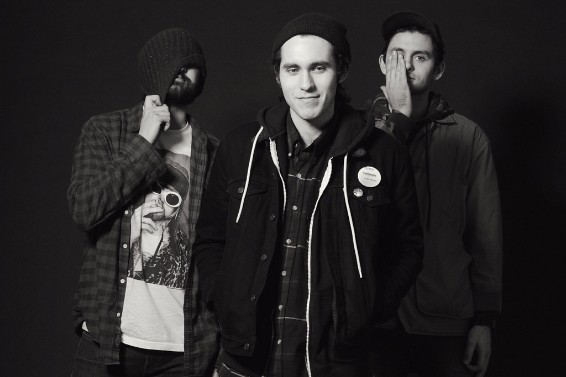 Boston, MA garage punks Black Beach are set to release Play Loud Die, Vol. II in September, an EP that they recorded with Paul Kolderie (Dinosaur Jr., Hole, Pixies) and the follow up to the band’s recent split with Nice Guys. The trio have pulled back from their “always at 10” approach to blown out fuzz, opting for more dynamics while making their sound all the more visceral in the process. One of the Boston underground’s best and most explosive new bands, Black Beach have added nuance to their menace, and they are only getting better in doing so.

Adhoc shared, “their new video for “Nothing’s Golden,” the final track off their upcoming release, Play Loud, Die Vol. 2, echoes the song’s minimalist approach, all while harking back to the genre’s trademark loud-soft dynamics … The track’s understated verses explode into propulsive choruses, accompanied by images of worms crawling around in the caved-in skulls of baby dolls.” Get spooky.

“The video and song kinda explains that initial shock of learning that something isn’t as good as it appears on the surface, and the way people tend to either be naive to how things actually are or choose to ignore them. The video was inspired by some old Dinosaur Jr videos, like “Freak Scene,” and some horror movies. It’s like a spooky “Freak Scene.”

Black Beach is a 3 piece rock outfit consisting of frontman Steve Instasi, bassist Ben Semeta, and Ryan Nicholson on drums. Hailing from southeastern New England, they shortly moved up the musical ranks of  the Boston underground. Black Beach have a sound that is both modern, yet undeniably rooted in the ancient rites of classic rock. Imagine Blue Cheer meets Spacemen 3, Sonic Youth and Black Sabbath having a baby, Black Beach take all forms of rock before them and blend them into a raucous, blistering concoction unlike anything you’ve heard before.

Savagely prowling their way through the basement scene of Boston, Black Beach sound infected the greater reaches of the East Coast. By the release of their debut LP Shallow Creatures, Black Beach’s wave of noisy aggression had already washed through Chicago, New Orleans, NYC, Nashville, Richmond, Philly, and the like. Quickly making an impact on the entire east coast, they had made it to larger venues with much more notable acts such as Acid King, Cosmonauts, and Bass Drum of Death.

Black Beach are not a garage gimmick like many of their peers, but instead push the envelope of what rock n roll really is. By synthesizing the legends of decades past with more modern influence, Black Beach make music that both comes from a familiar place, but still feels new and refreshing. Fuzzed out, crushed out, blown out, their sound is bone-shakingly urgent.

Whether you see them in a dank basement, your local nightclub, or a big stage, Black Beach will undoubtedly melt your face in the most beautiful way. Make sure you keep an eye out for these three as they continue to shred to their hardest degree; keeping rock n roll gritty, loud, and real for ages to come.