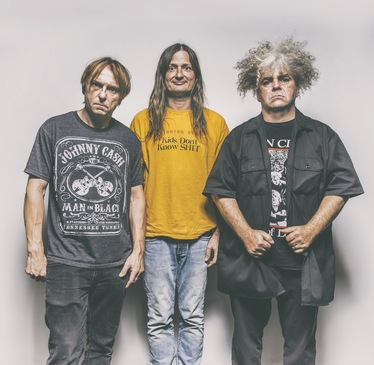 About the album…the trio of Buzz Osborne, Dale Crover and Steve McDonald showcase two distinct sides of the band’s music:

Death, a proper Melvins’ release and Love, the score to the Jesse Nieminen directed, self-produced short also titled A Walk With Love & Death. The release date for the short has not been announced yet but a trailer has been made available. The albums, which include guests Joey Santiago (The Pixies), Teri Gender Bender (Le Butcherettes/Crystal Fairy) and Anna Waronker (That Dog), were co-produced with Toshi Kosai.
MELVINS: A WALK WITH LOVE & DEATH NOW STREAMING
ORDER THE 23-TRACK RELEASE NOW
TRACK LIST:
Love
1. Aim High
2. Queen Powder Party
3. Street Level St. Paul
4. The Hidden Joice
5. Give It To Me
6. Chicken Butt
7. Eat Yourself Out
8. Scooba
9. Halfway to the Bakersfield Mall
10. Pacoima Normal
11. Park Head
12. T-Burg
13. Track Star
14. The Asshole Bastard
Death
1. Black Heath
2. Sober-delic (acid only)
3.Euthanasia
4. What’s Wrong With You
5. Edgar the Elephant
6. Christ Hammer
7. Flaming Creature
8. Cactus Party
9. Cardboro Negro
“Twenty-five albums in, the band have long since perfected a sound that’s as dense as a neutron star…it is hard not to admire the band’s continued willingness to bash at the boundaries of extreme music.” – THE GUARDIAN
“A Walk With Love and Death re-frames the Melvins’ legacy with newfound aplomb. Whilst perhaps unlikely to win over anyone sitting on the fence up until now (unless, of course, brief appearances by The Pixies’ Joey Santiago, Le Butcherettes’ Teri Gender Bender and That Dog’s Anna Waronker here make all the difference) this is not merely their most impressively realised effort in many a moon, but also one of the most rewarding listens of the year thus far.” – THE LINE OF BEST FIT [9/10]
“A fun fairground of a record.” – WIRE
“Ample doses of both the band’s stock-in-trade of gnarly, fuzzy bruisers and demonstrations of its more experimental side on the film soundtrack…Only the-Melvins could benefit from a spectrum wide-enough to encompass a Chocolate Watch Band-worthy garage-rocker (“What’s Wrong With You”), a squelchy slab of semi-ambient menace (“Halfway To The Bakersfield Mall”) and a scat-jazz number (“Scooba”).” – UNCUT [8/10]
“Love might be an acquired taste but Death offers a sumptuous feast of pure, uncut head candy.” – METAL HAMMER [8/10]
“Both are equally mind bending…A Walk With Love & Death proves how Buzz Osborne and co are still melting minds and expectations almost 35 years into their career. Look up ‘uncompromising’ in the dictionary and it’ll just say The Melvins.” – LOUDER THAN WAR
www.facebook.com/melvinsarmy