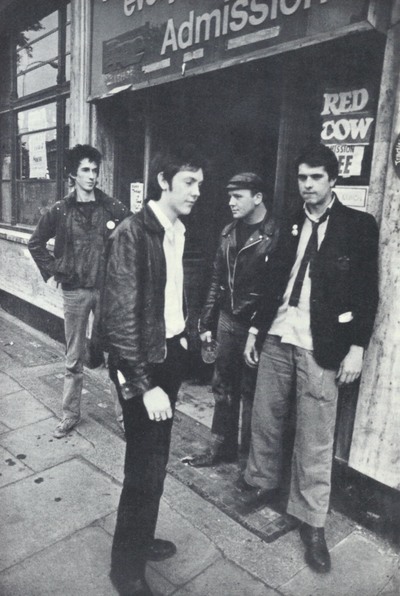 THE LURKERS
40th Anniversary 5-cd box set
Reissue of their first ever single Shadow/Love Story on 7″
Due out on 28 July via Beggars Arkive
Pre-order link:
https://archive.beggars.com/lurkers5cd/
Beggars Arkive is excited to release a 5-cd box set for pioneering British punk band The Lurkers.  The Lurkers were the first ever band on Beggars Banquet, and the whole label history boils down to their existence. Formed in West London in 1976, they are one of the most notable bands of early UK punk and within eighteen months the band had 5 UK top 75 chart singles with appearances on Top Of The Pops. This 5-cd, 86 track box includes their two Beggars Banquet albums (Fulham Fallout and God’s Lonely Men), all of their singles and 9 demos, 21 BBC session tracks, and the Pete Stride / John Plain album New Guitars In Town (the first time on CD), due out on 28 July (excluding North America).
Now cult icons, their early singles have been noted over the years as being punk classics. Henry Rollins included their debut album “Fulham Fallout” as one of his 20 favourite punk albums in LA Weekly, and Mojo included their “Just Thirteen” single in their list of the best punk rock singles of all time.
Martin Mills, the founder of Beggars Banquet, talks about the start of the label and the beginning of The Lurkers…. “Underneath our Fulham shop (Beggars Banquet record store) we had a basement which we turned into a rehearsal room where punk bands like Generation X went to rehearse. One of the other bands that rehearsed down there was The Lurkers. The manager of the shop, Mike Stone, started to manage the band because they needed help. Then he needed help so we started managing them and trying to get them a deal – but we couldn’t. This was 1976 and at that point there weren’t very many labels, and each one had already signed their one punk band – and that was it. So we set about doing the record ourselves in a way that is now second-nature to almost anyone in a band. But then it was such an unusual thing to do. Then there was no road-map. There were no small independent record companies, so we worked out how to put a record out ourselves. We ended up putting out our first single by The Lurkers soon after Stiff put out ‘Buy 1’ with Nick Lowe and Chiswick put out their first single. So the three of us started at pretty much the same time. It was a lot of fun and a piece of cake, to be honest, because there were so few punk singles around that everyone bought everything there was. There was this completely captive market. So we did another Lurkers single which was just as much fun. Then we thought, let’s put out an album, and we did. Which was Streets, a punk compilation album from all the independent labels that were suddenly springing up. After this we put out the first Lurkers album.”
The early line-up consisted of Pete Stride on Guitar, Pete “Manic Esso” Haynes on drums, Howard Wall on vocals and Arturo Bassickon Bass (replaced after the first two singles by Nigel Moore).
Their first single, released exactly 40 years ago, was the song “Shadow” b/w “Love Story”. Their biggest hit was 1978’s “Aint Got A Clue” which reached #45 on the UK singles chart. The band was a John Peel favourite, recording four sessions, and they played Top Of The Pops as well as other high profile UK shows. Disbanding after the release of their second album, they re-formed in 1982 with a new vocalist but broke up again in 1984. In the years since, the band has continued in various forms, notably with the three core members under the name The Lurkers God’s Lonely Men who most recently released an album titled The Future’s Calling.
The Lurkers had no schtick, no frills. They were inspired by the Ramones and the New York Dolls, the British beat boom of the ‘60s and Glam Rock band like Slade and Sweet. While the other bands embracing punk at the time were flaunting their sound with typically “punk” safety pins and spiky hair, The Lurkers had unfashionably long hair and even, on occasion, wore white suits.
“The name of our band is The Lurkers because that’s what we are…we’re all a bunch of temperamental so and so’s. But we won’t conform to anybody’s fashions. Before the Lurkers I was playing jazz… this New Wave thing came along and I was crazy on it. We all were because we thought it was genuinely outcast by society. But it’s all just another fashion.”  Esso – Sounds 3.6.1978