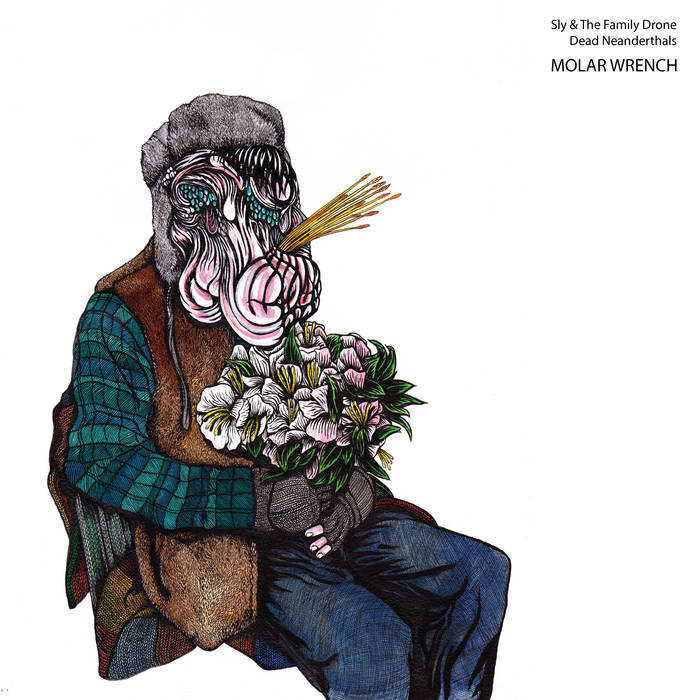 After successfully collaborating on a split for the God Unknown label last year avant-garde purveyors of noise Sly & the Family Drone and free jazz unit Dead Neanderthals have teamed up once more to release an LP, this time via Hominid Sounds.

Their ‘Molar Wrench’ album is not for the faint-hearted or those who like their music served mainstream; it’s a snarling caravan of strange beasts each prickling with experimental and discordant noise, twisting away from the noose of any standard melodic constraint in favour of the freedom of pure noise. This is a brilliant journey into the unknown; an elemental and radical racket of avant-garde art.

Opener ‘Ghoul Whispers’ doesn’t mess about – a free form terror it screams at you, the incessant and insect-like buzz builds beneath while the hiss of white noise brings you to your knees. The melody distantly growls outside the prison of sound quickly and effectively encasing you until the track breaks down to throbbing exhaust and space swirls leaving only some crisp drum fills around which to orientate yourself.

Beneath the squalling saxophone of ‘Muck Man Part 1’ there is a deep rhythm to lock into, a relentless pounding, a swell and fall that takes you by stealth. It’s here that you begin to be able to pick a path through the cacophony of noise, thrilled by what’s lurking in the shadows of this track and transfixed by the thrum of those lower registers.

Things only get more sinister with ‘Muck Man Part 2’, ghostly atmospherics, shimmering percussion and ominous beats fluttering in and out make this a dark drop, no less overwhelming for being subtler in delivering its dissonance than the outright din of its predecessor. At times it feels as if the track is at one level escaping, air squealing between the pinched mouth of a balloon, yet with the loose-limbed gallop of some gigantic devil in the drums it also has a sense of chasing you down. As it heads into the second half the ominous tones become diabolically triumphant, a nightmarish circus rolling into town.

After which final track ‘Molar Wrench’ seems almost soothing, although is less about relaxing and more about succumbing to your fate at the will of these most feral sounds. The background drone returns but is more lightly touched by that paced percussion, picking up as the track goes along. This is wide-eyed front-row seat at the cosmic ballet stuff; on the surface a discombobulated noise while in the depths beneath lurks not nonsense but new worlds.

This is a stunning, and sometimes sinister, collaboration which brings together the experimental blast of the UK’s Sly & The Family Drone and the beyond border free jazz of Dead Neanderthals. There is no respite in this brutal, beautiful, petrifying and prepossessing album and as an offering from these two bands we’d be disappointed at anything less.

The split LP is out now via Hominid Sounds on ltd coloured vinyl and download – find it on Bandcamp. https://hominidsounds.bandcamp.com/album/molar-wrench