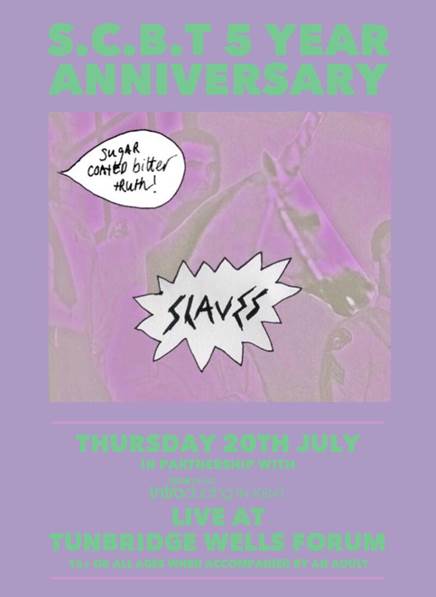 To mark the 5 year anniversary of their self-released debut mini-album, Kentish Punk provocateurs Slaves will be doing a very special hometown gig at the Tunbridge Wells Forum, where they’ll be playing ‘Sugar Coated Bitter Truth’ in full!

Of the event, guitarist, Laurie Vincent said “It’s been 5 years since we released our first body of music, ‘Sugar Coated Bitter Truth.’ Recorded in the Tunbridge Wells Forum in 2012, it kicked off our career and started us getting played on the radio, leading to our first ever festival slot at Reading and Leeds. To celebrate we return to the scene of the crime for a one off gig!”

Five years on the mini-album still fizzles with the raw energy of a young band giving it everything they’ve got. Early bangers like ‘Girl Fight’, ‘Where’s your Car Debbie’ and ‘White Knuckle Ride’ all regularly feature in the bands frantic live sets to this day.

Isaac Holman (vocals, drums) and Laurie Vincent (guitar, vocals) have been creating primal rock noise as Slaves since 2012, since then they’ve released two top ten albums and performed all over the world including at legendary festivals such as SXSW, Reading & Leeds andGlastonbury.

Tickets for the show, which is in partnership with BBC Introducing in Kent, will be via lottery. Fans can sign up on [dice.fm/event/slaves-20th-jul-tunbridge-wells-forum-tickets]Dice for the chance to buy tickets until midnight tonight.  Post sign up there will be a 24 hour window to purchase tickets for the show on Thursday July 20th.

The band is currently playing shows and festivals across The UK and Europe.