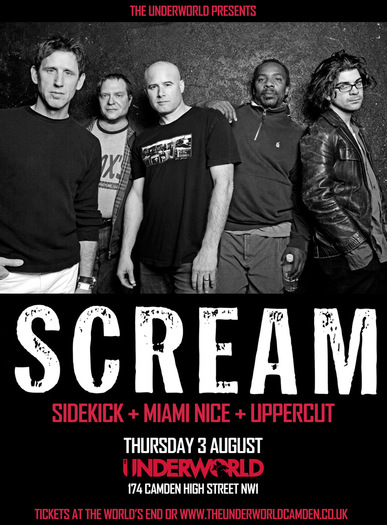 SCREAM: LEGENDARY DC HARDCORE PUNK BAND RETURN FOR UK FOR THE FIRST TIME IN 30 YEARS;
ORIGINAL LINE UP OF VOCALIST PETE STAHL, GUITARIST FRANZ STAHL, BASSIST
SKEETER THOMPSON AND DRUMMER KENT STAX
Nearly 30 years since their last appearance in the UK Washington DCs Scream return this summer to play a select few shows. Shows in London and Leeds lead up to a much anticipated performance at the prestigious Rebellion Festival in Blackpool. Known for their incendiary live performances, an urgent mix of punk, Bad Brains/Clash-inspired dub, and rock-and-roll swagger, the original lineup of vocalist Pete Stahl, guitarist Franz Stahl, bassist Skeeter Thompson, drummer Kent Stax will be exactly what you get. The band could not be more excited to share the stage, and festival with such iconic Punk acts of the past. Scream will come out swinging, and will show they have not lost a hint of the snarl they possessed some two plus decades ago.
As D.C.’s hardcore punk mythology continues to grow, interest in Scream has never waned. With an extensive discography—starting with the seminalStill Screaming and bookended by the re-release of No More Censorship (with a teenage Dave Grohl on drums) upcoming in the Autumn, the band’s fanbase remains committed, as the past few year of sold-out gigging with Off!, Foo Fighters, Corrosion of Conformity and others has proven.  The decision to reunite seems to have collectively reinvigorated the band. Something that, as Stahl admits, may have been needed personally. “We were all going through a lot of tough personal things, and thought that getting the band back together would bring some happiness back into our lives.” Does the fan reaction surprise Stahl at all? Not really. “Our music stands on its own merit,” the frontman reasons, “And we always give it all we got“.
Still screaming after all of these years? Indeed.
LIVE DATES:
August 3rd – The Underworld Camden, London
August 4th – Bloodstains Hardcore Festival @ Temple Of Boom, Leeds
August 5th – Rebellion Festival @ Winter Gardens, Blackpool
http://www.southernlord.com